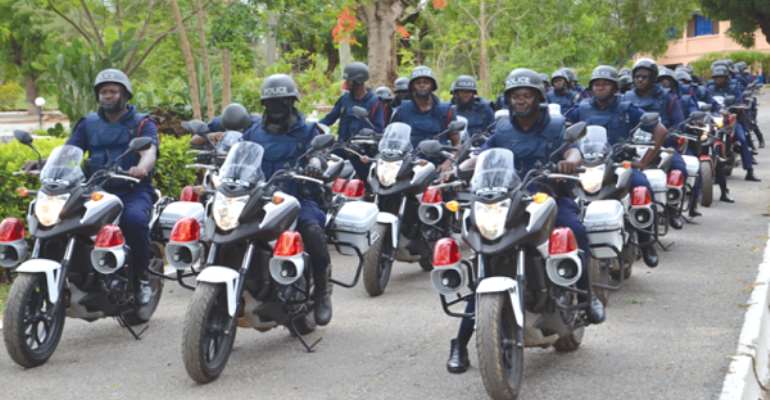 Like all life as we know now, Europe says the police service has its origins with them—so there you have it, modern police systems find their roots in Europe. The pseudo-continent had at the start of the 18th century, experienced exponential escalations in crime, especially in their cities—perhaps, in part owing to the industrial revolution the region was experiencing. The law enforcement mechanisms in place during and prior to this period had been, among others—and Mr. Gandhi would not like this—something close to: an eye for an eye, a tooth for a tooth. Except when I stole an eye of yours, you could go for my heart; and for your tooth, you could take my lungs. Citizens settled their cases among themselves—most of the time. There were the duels. Oh, the duels! If you think certain past African practices absurd, then hold Europe’s beer for their duels. It was perhaps the height of human baseness, and Europe supposed mother of all civilization as we know it (supposed—supposed.) was home, too, to this human folly.

The Duels
So then, you, at the height of your profession—legal, financial, health, business—all those fanciful professions; you, a man (I’d like to include here ‘woman’ but then, in this senseless charade, it was strictly ‘man’); you, having accumulated such vast wealth in the course of your profession; you waiting to go on pension, or already on pension, enjoying or intending to enjoy the fruits of your labour—when wronged by your fellow man, would say something close to, “I need satisfaction”, meaning ‘meet me outside.’ And the two of you, each wielding a weapon—sword, gun (choose your choice) will battle it out.

Mostly it was ‘honour’ at stake—one man would invite another man out to duel, sometimes to death, because his honour had been hurt by the other. Is it not these rich people, supposed esteemed people who cared for honour, so much so that they were willing to, within a blink of an eye, cut their own lives, or another’s life short? The gentlemen’s duel—it was called. A man who lived long, avoiding such battles was a cowardly man—what is long-life if a man has never defended his honour? In these duels, the loser—specifically, the injured or dead man—was automatically adjudged the guilty party; the winner/living/un-scratched, innocent.

Reasons to duel? Oh, maybe you told another man that he smelled like a pig; or that his wife had a flat chest; or that he was short, or fat; or perhaps you found yourself, pen in hand, staining another man’s white shirt with blue ink—all these things could lead to dueling, injuries and perhaps death.

Civilization
Increased crime rates in the subcontinent in the 18th century necessitated the creation of a law enforcement agency—one differing from the dueling, mob justices, militarism, etc. the region had and were still witnessing. So then: the police—an institution initially vehemently argued against. Europe in its institution of the police, had faced vehement protests by its populace—prominent and average citizens alike. The fear was that a law enforcement agency formed under the executive arm of government would mean making this organ of government too powerful, and easily prone to breaching civil rights. This argument was, however, defeated with this increase in crime. Crime necessitated the creation of modern police system, as we know it now. (no shock there.)

“I don’t get no respect”
Fast-forward to today, and the police—these crime fighters, these men and women employed to safeguard the peace, these people serving a very vital societal purpose—are worldwide, subject to no respect. Why? Because they do not deserve it? Yes? No? If we choose to go with ‘yes’—it must be a soft yes, at least. For the institution itself—the basis for its formation: ‘to safeguard the peace’, ‘protect society’, etc. all these are words and phrasings deserving respect. These are things the institution ‘ought to be’—and that, that deserves all the respect it can get.

‘Service with integrity’—says the slogan of Ghana Police, ‘To Serve and To Protect’—says the motto of Los Angeles Police Department (LAPD). Yet these agencies, like many other police institutions worldwide, are subject to insults—insults that seem to suggest failures in mandates. If failure be the cause of these mockeries and disdains, we must note that the police does not exist outside the realm of governance. Perhaps (perhaps!—emphasis necessary) they are what we made them.

“Defund the Police” is actually the slogan of a movement in America, seeking to, as the name suggests, defund the police. Some have gone so far as to call for a total abolition of the nation’s police service altogether.

These are comments by Ghanaians under a certain article. “The police must be purged!” “One of the worst institutions!” “It is better to find justice yourself than to rely on Ghana police—people of low intelligence causing embarrassment” (This commenter seemed to be showing pro-dueling tendencies.)

Light at the End of the Tunnel
Ghana stands a better chance of finding success in her bid at creating a functioning police service than, say, USA—a country with a long history of injustices. The nation’s past (and present) legislations, justice systems, like all aspects of its national lives, were created with the protection of its White citizens only, in mind. Blacks have been on the receiving end of endless, ever-changing forms of torture, attacks, monstrosities, in all shapes and forms—from all sections of society. Hence, the nation’s fight towards a functioning police service does not end with: restructuring of the police service, war on corruption within the police service, re-training of police forces, etc. The journey towards a fair and just American police service has one mighty hurdle to cross—the hurdle of racial prejudices. And if ever there was a difficult root to uproot, it is this.

Ghana has no such institutionalised racialism existing in her law enforcement agencies. The creation of an effective, fair, just police service, one that actually and consistently lives up to its mandate of: ‘service with INTEGRITY’ is a much more doable task in the Ghanaian context. Like every development imperative, Ghana is not short on the ‘how’. Our problem is not with: ‘but how are we going to do it’, for we know—we always know. Our main problem always lies with our tendencies to consistently sweep things under the carpet. The police occupy such crucial place in our national lives that we cannot afford to keep them relegated to positions of ‘bottom-priority’. Is it not bizarre that an institution created with the intention of ‘safeguarding law and order’ is overlooked and derided—what does that say of a country’s law, order, and safety atmosphere?