Traders At Okaikwei Demand Head Of MCE Over Destruction Of Goods, Military Assault 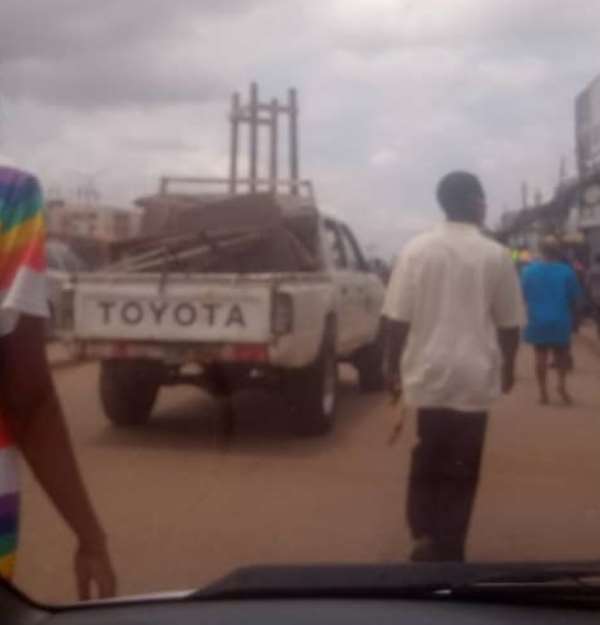 A large number of traders in the Okaikwei North Municipality are fuming with rage over what they described as needless intimidation, brutalities and destruction of their goods by some armed military-police allegedly deployed by the Municipal Chief Executive, Nii Boye Laryea.

The aggrieved traders from both the Okaikwei North and Central Constituencies claimed they had been under intense pressure from the MCE and the security personnel to vacate their shops without any provocation. They insisted that the behaviour or the MCE and the Municipal Assembly had come as a surprise to them since they had not been served with any verbal or written notification for any evacuation exercise.

In a statement issued by the Concerned Citizens of Okaikwei North led by Mr. Akwasi Yeboah alleged that the joint military-police team was going about assaulting the traders and destroying their goods mercilessly. The security personnel who according to the traders were working under the orders of the MCE, had also canned several women and seized their tables and goods.

The goods were either destroyed or packed in pickup vehicles and sent away by the military-police team.

“We the good people of Okaikwei North and Central constituencies will not sit idle for the MCE to treat us as if we are under a military rule in these two constituencies. The brutality and force he is using will eventually force us to take the law into our own hands and go after him”.

The traders are backing their claims with videos and photographs already going viral on social media as proof of the operations of the military-police team.

The Concerned Citizens alleged that the MCE, Nii Boye Laryea had refused to withdraw the armed security personnel in spite of their constant appeal for the past weeks.

According to the traders, most of them were out of business for several months due to the outbreak of the Coronavirus and had just resumed work a few weeks or months ago. They therefore found it very absurd for the MCE to try to perpetually keep them out of business.

They are appealing to the Members of Parliament (MPs) for Okaikwei North and Central Hon Fuseini Issah and Hon Patrick Boamah to intervene for them.

The group is also threatening to embark of a massive demonstration against the MCE and the Government if their appeal through the MPs also fails.

When contacted via his cell phone, the Okaikwei North Municipal Chief Executive, Hon. Nii Boye Laryea said the Municipality was too big enough for him to notice or have an idea of any such operation by a team of military-police.

He claimed that he does not know anything about any deployment of security personnel to drive away traders in any part of the Municipality unless of course, this reporter is able to mention the exact spot within the Municipality the operation was taking place.

Nii Boye Laryea who was apparently not ready to engage further with this reporter said he was busy working and did not have the time to waste.