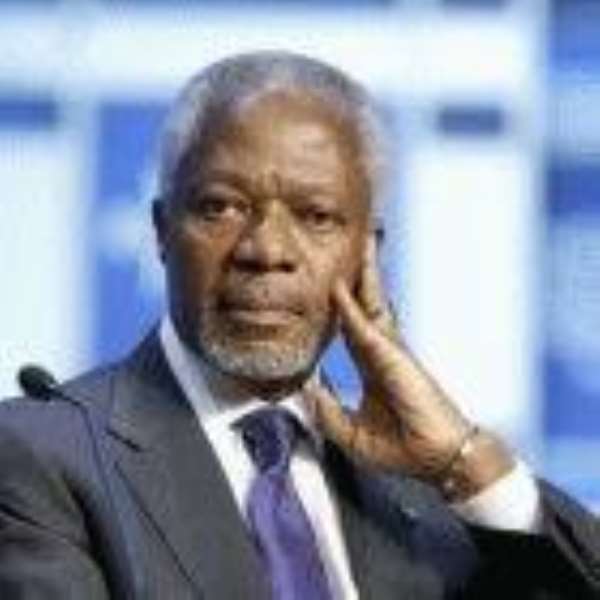 Kofi Annan, the first son of sub-Saharan Africa to head the United Nations, is standing down after a decade in which the continent's respect for the body sank even if it did not hold him responsible.

South Korean Foreign Minister Ban Ki-Moon was set to be formally endorsed as the new UN chief on Monday, bringing to an end the former Ghanaian diplomat's ten-year tenure of the world body.

While leaders of the world's poorest continent have paid tribute to Annan's personal qualities, they have never been more frustrated at their lack of influence nor less welcoming of a UN presence on their turf.

The United Nations can point to few successes in Africa during Annan's turn at the helm, while his failure to implement reform of the decision-making Security Council has left the continent on the brink of revolt.

South African President Thabo Mbeki recently described Annan as "an outstanding global leader who has done Africa proud" but his verdict on the institution he leads was less complimentary verdict.

"Why must we listen to them?," he asked at the Non-Aligned Movement (NAM) summit in Havana. "When we are not represented properly in these institutions, why do they think they have the capacity to take decisions for us?"

According to Norman Mlambo, an analyst at the Pretoria-based Africa Institute, Annan has done little to shift the focus of world attention towards the continent.

"There is no sense that Africa got a better deal during the time of Kofi Annan," said Mlambo. "I do not think there was any real shift to focus on Africa. It was business as usual for the UN."

The UN was confronted by no shortage of African crises during the Annan era, including conflicts in the Democratic Republic of Congo (DRC) and Darfur.

One of the largest challenges was in Sierra Leone, where a 17 000-strong UN force helped end a 10-year civil war and oversee democratic elections.

It can also point to a degree of success in neighbouring Liberia, with warlord-turned-president Charles Taylor eventually arrested after a UN tribunal issued a war crimes warrant.

In the third West African trouble spot, the Ivory Coast, the record has been less successful. A UN-imposed deadline for elections later this month, designed to resolve a conflict simmering since 2002, has been rejected by local leaders.

Despite the best intentions, the UN's inability to intervene decisively as a result of local opposition finds an echo through much of the continent.

In the Sudanese region of Darfur, opposition from the Khartoum government means the deployment of up to 20 000 UN peacekeepers - mandated by the Security Council in August - has yet to materialise.

The UN maintains only a skeleton team of local staff in Somalia, fearful of falling foul of warlords who have been competing for territory since 1991.

In Zimbabwe, the UN initially tried to host a conference to resolve the land issue but was left on the sidelines when the seizure of white-owned farms began. Annan was then expected to get personally involved with a trip to Harare in July, but an invitation from President Robert Mugabe never materialised.

Mugabe remains suspicious of the UN, with its decision-making process still largely the preserve of the five permanent security council members (Britain, China, France, Russia and the United States)

"Africa remains the only continent which does not have a permanent seat with veto power in the security council," he told the general assembly last month. "That situation is unacceptable. It needs to be corrected and corrected now."

While Africa remains without a permanent seat, Annan's push for a reformed Security Council that was "more representative, especially of the developing world" has won praise.

"He began the process of reforming the security council under which Africa should receive two posts. It is an important reform, even if it has yet to be accomplished," DRC Foreign Minister Raymond Ramazani Baya told AFP.

According to Ramazani Baya, Annan's room for manoeuvre has been restricted throughout his tenure by the big five.

"It is true that the secretary general plays a predominant role, but only under the control of the permanent members."

Albert Tevoedjre, the UN's former chief mediator in the Ivory Coast, said Africa was losing a "good listener" with the departure of Annan.

"As a result of his background, Annan was able to look at Africa with an African eye," he told AFP. "We are going to miss him in all sorts of ways." Sapa-AFP