By Mariëtte Reyneke - The Conversation 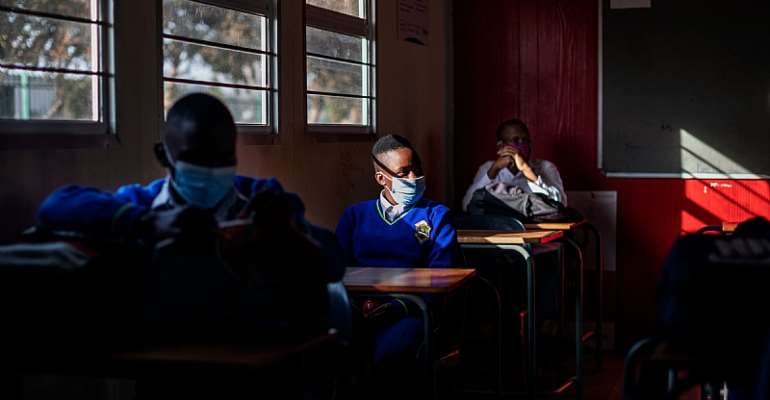 South Africa has to balance a number of factors when considering how to handle schools during the pandemic. - Source: MICHELE SPATARI/AFP via Getty Images

Since the first case of COVID-19 was reported in South Africa, the question of how to manage the country's schools has been top of mind. Schools were closed in March and, as part of a phased approach , began returning from June. The risks associated with the pandemic mean the situation could change at any moment.

There has been much debate about whether schools should be open at all. Some have pointed out that children's rights – to dignity, life, equality and education, among other things – must be considered throughout. While this is correct, in the legal sense, the situation is slightly more complex.

Read more: COVID-19 school closures in South Africa and their impact on children

This can be illustrated by at least two South African court judgments. Drawing from these findings, there are a few basic legal principles to consider when it comes to children's rights.

Second, when children are affected by the decision, the decision maker needs to do a separate or additional investigation into the impact of the decision on the interests of the children concerned.

The decision-maker must then take all reasonable steps to minimise any negative impact on the best interests of children. This is of paramount importance in terms of the Constitution .

The national and provincial departments of education took the first step to take the most appropriate decision in the circumstance: to close the schools when it did. But the second step – thoroughly assessing the impact of closures – should have received more attention, especially when it came to how children were affected by the closure of school feeding schemes.

Education authorities knew that children would suffer without feeding schemes but said they did not have the capacity to keep the schemes running while schools were closed. Civil society groups urged the department to rethink its position; the matter eventually went to court .

It is clear that the department did not fulfil the second step: going the extra mile to mitigate the negative effects of school closures on children. And it dismally failed on step three by not taking all reasonable steps to minimise the impact of closing feeding schemes.

One would have expected a department responsible for 13 million children to prioritise those children's best interests. But it seems as though the political will to comply with the constitutional obligation to optimise children's best interests is lacking. This can also be seen in the general state of public schooling, from overcrowded classrooms to a lack of water and sanitation at many schools .

And yet the country's Constitution , as well as several court rulings, offer clear guidelines for how children's best interests should be managed and prioritised.

I base my arguments here on two important cases. In 2007 the Constitutional Court set a clear precedent in S v M on how to ensure that decision-makers give effect to children's best interests.

The case dealt with the question of whether a single mother found guilty of fraud – and who had four children – should be sentenced to direct imprisonment or correctional supervision.

Courts normally consider a few factors in determining an appropriate sentence: the interests of the community, the offender's personal circumstances (including whether or not they have dependants) and the gravity of the offence. The central question in this case was how to act in the best interests of the woman's children – and, by association, the children of all offenders.

The court ruled that the children's best interests tipped the scales in favour of correctional supervision. The offender was a single mother and there was nobody to take care of the children if she was jailed. Crucially, other factors were taken into account: the woman had already paid some of the money back to the people she defrauded, and she'd stolen a relatively small amount. This case permanently shifted the approach to sentencing when an offender has dependants. There must be an independent investigation into the impact of a sentencing decision on the interests of an offender's children.

A second case, from the Supreme Court of Appeal, shows how crucial it is for the decision-maker to take as many steps as possible to mitigate the negative effects of any action on children.

In this instance, though, the offender was in a position of trust with her employer and defrauded him of a large amount of money. The severity of the crime meant direct imprisonment was the only acceptable sentence. However, it was clear that her child's best interests would be affected as the child would need to go into foster care.

The child's interest could not and should not change the court's sentencing decision. In this instance the court's separate investigation ended with several recommendations designed to do as little harm to the child as possible. These included ensuring that mother and child maintained contact so their relationship could develop and they could eventually be reunited. The court ruled that the Department of Correctional Services should ensure the mother and child had frequent contact and that the child could visit the mother. This was not part of the traditional approach to sentencing.

These cases and others that form part of South Africa's case law show that it's not enough just to consider children's best interests. Decision-makers also need to go a step or two further and optimise children's circumstances as much as is possible.

There will no doubt be more tough decisions around COVID and schooling in the coming months, or even years. The department of education has to consider postponing exams, closing schools where there are COVID cases, and how to catch up on lost class time. In doing so, it must do everything possible to go the extra mile for pupils and minimise the impact of the pandemic. This may include, but not be limited to, making sure schools have access to clean water and proper sanitation and allowing schools to be flexible in managing the impact on the children at that particular school.

Mariëtte Reyneke does not work for, consult, own shares in or receive funding from any company or organisation that would benefit from this article, and has disclosed no relevant affiliations beyond their academic appointment.

By Mariëtte Reyneke, Associate Professor in Education law, University of the Free State