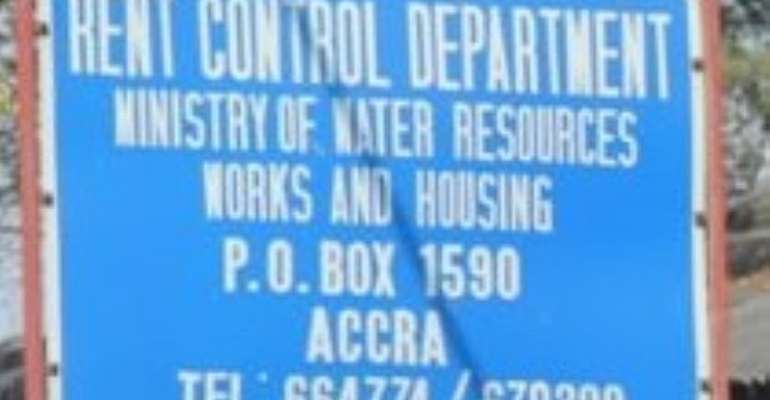 An article published on GhanaWeb by the Rent Control Department on the 21st day of May 2017 states that " It is illegal to charge rent advance beyond six months."

This was a statement made by Mr Adam Yaminu Kasim, the Upper East Regional Manager for Rent Control Department. He based his assertion on the Rent Control Act 220, which forbids landlords from charging rent payments in advance beyond six months. That it is illegal for landlords to fix rents for a room without the approval of the rent control department.

Nonetheless, it so unfortunate that these beautiful articles are published but are not rigorously enforced. It will interest you to know that a year and a few months after this article was published, I was stranded in Accra together with my colleagues. I completed school in Kumasi and was posted to Accra for National Service.

For the entire 11 months, I had to perch at places far from where I was posted just because landlords were not ready to take a year advance; even if they were, it was so expensive.

However, the narrative changed a few days to my end of service when I entered the house of Mr George Laryea. I could confidently say he is a rare gem.

I entered George Laryea's house last year as someone who was almost done with National Service and had almost secured a part-time job at my place of work. Thus, I needed accommodation. I went to other houses where they demanded two years advance and some agents who ended up scooping from the little I had all in the name of I could get you a place with self meter blah! blah! blah! which definitely turned out futile. I took the pain to go around myself and that was when I finally met Mr George Laryea. On getting there, he asked: "What do you do? " I told him I was just about to complete National Service. Then, he said, "Well, I'm giving the room out for GHS100 cedis but because it does not have a "trap-door" yet, I will give it to you at GHS 90. " It was a done deal. After a few minutes of pause, he asked: "How many months can you pay for? Three? Six? or 12?" In fact, I was shocked to the bone to hear him even mention monthly payment while others were demanding two years advance payment.

One might think that I had obtained this favour because I am a lady. Far from it. It will even interest you to know that they both (I mean the husband and wife) took this decision.

You might even be tempted to conclude that it is a one time something. However, this has repeated itself yesterday the 21st of September, 2020.

I received a call from a friend who was in a dying need of accommodation and I remembered there is an empty room just by mine. This time, it is a man, just for you to know that it's not about gender. When I contacted my Landlady, she said it is available for rent and the very words that were spoken to me last year were repeated. I think this is something worth emulating.

Therefore, I am by this write-up pleading with all landlords across Ghana that in this difficult times where we all are battling this "world silencer" affectionately called covid 19, they should, like Mr George Laryea, lift the law from the paper and put it in action.