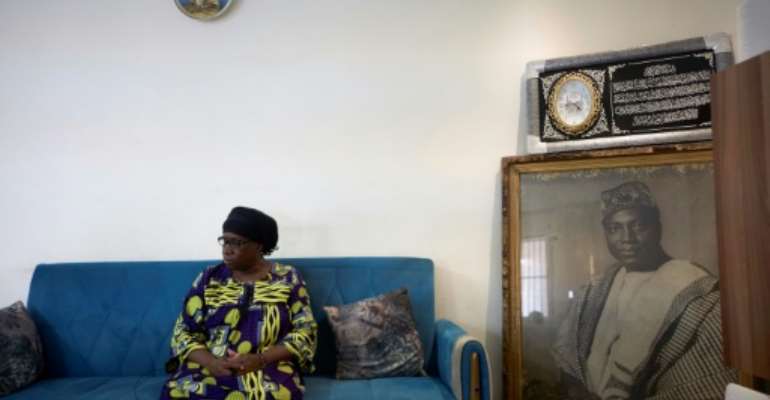 Hatouma Keita, Modibo Keita's daughter, poses next to a portrait of her father in Bamako. By MICHELE CATTANI (AFP)

Mali's first president Modibo Keita roused citizens to push the country forward when he took office in 1960, after decades of French rule, and precipitated a time many remember as one of industry and hope.

But 60 years on, the optimism of the post-independence era has given way to chronic instability in Mali, which is plagued by corruption, poverty and a lethal jihadist conflict.

Modibo Keita's remaining family members, who are nostalgic for his time in office, assiduously keep the ex-president's memory alive.

She has hung a flag from her Bamako home as well as placards bearing her father's image for the country's independence day celebrations on Tuesday. Curious passersby stop to take a look.

After he came to power on September 22, 1960, Keita made his mark by pursuing socialist policies and large development projects.

Modibo Keita's remaining family members are nostalgic for his time in office. By MICHELE CATTANI (AFP)

Keita's government was not devoid of criticism at the time, however, and his economic policies provoked a strong backlash.

The president was overthrown in 1968 by Moussa Traore, a young army lieutenant, and he died in detention in 1977.

Traore -- who himself died last week, aged 83 -- went on to rule Mali with an iron fist for 22 years, a time during which few mentioned Keita, Diakite said, and many of the former president's family members fled.

But Keita's memory began to creep back into the public consciousness after the military toppled Traore in 1991.

Governments constructed a memorial in his honour, and named an airport and stadium after him.

Fatoumata Keita Diallo, the former leader's elderly third wife, says that the ex-president was "above others" politically.

"We need to find another Modibo Keita now, but you won't find one," Diallo said, alluding to Mali's latest political crisis.

A clutch of young officers overthrew president Ibrahim Boubacar Keita in a military coup on August 18, after months of protests against him in the country.

A soldier prepares to play in a parade for a ceremony to mark the 60th anniversary of Mali's independence in Bamako on Tuesday. By MICHELE CATTANI (AFP)

Those protests were in part generated by Mali's inability to quell a brutal Islamist insurgency which first emerged in 2012, and has since spread to neighbouring Mali and Burkina Faso.

Mali is less hopeful today than when Keita took office 60 years ago.

"All Malians must consider themselves as mobilised for the construction of the republic of Mali, homeland of all those who are firmly committed to the achievement of independence and African unity," he said at the time.

For his adopted daughter Diakite, the achievement of that ambition lies in doubt.

"Are we even independent today?" she asks.