Court Place Injunction On Over 800 Individuals, Developers At Tse Addo 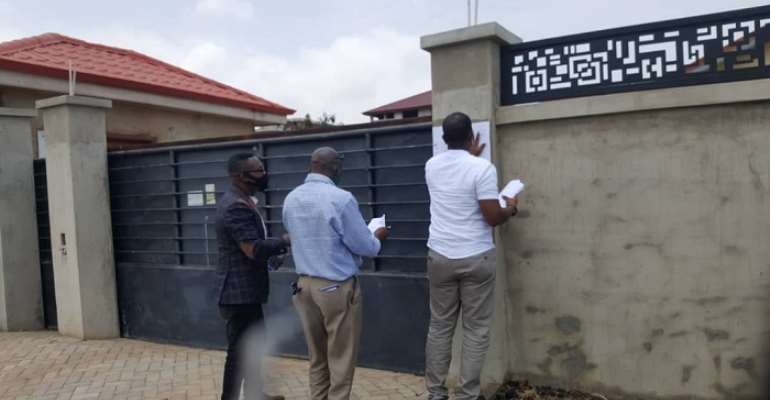 Bailiffs from the court pasting the injunction on the properties

Over 800 individuals and developers undertaking building projects at Tse Addo behind the La Trade Fair have been barred from working by an Accra High Court Land Division in Accra.

The move was as a result of an interlocutory injunction placed on them by the Nii Odoitso Kwao family for encroaching on their land.

The family is apparently in court challenging the Ataa Tawiah Tsinalatse and Ofoli Kwashie family of La, the Trustees, East Dadekotopon Development Trust and Lands Commission over the land.

Justice of the High Court Land Division, Alexander Osei Tutu therefore ordered the defendants, their servants, agents, privies, workmen, grantor among others claiming ownership of the disputed land to restrain from interfering with the ownership of the disputed land either by granting it to a third party or developing or trespassing pending the determination of the suit.

The Accra Regional Police Command on Friday provided security to five of the court bailiff assigned to carry out the order.

One of the bailiffs who spoke on condition of anonymity said there was the need for them to be protected to prevent any possible attack.

The head of the Nii Odoitso Family, Roland Nii Tetteh Tetteh who was part of the team said the land is about three thousand acres.

He said the court granted an injunction on the parties in 2018 and since it has been abused, the court again granted that the injunction be pasted, published in the newspapers, pasted on the court’s notice board and on the structures on the disputed land.

He revealed that, opportunity would be given to individuals who would want to regularize their documentation with the family.

Meanwhile, the police has said that they are there to protect the bailiffs as they carry out the order from the court.

“I'll be a prime minister in Egypt” — Koku Anyidoho reacts t...
1 minute ago