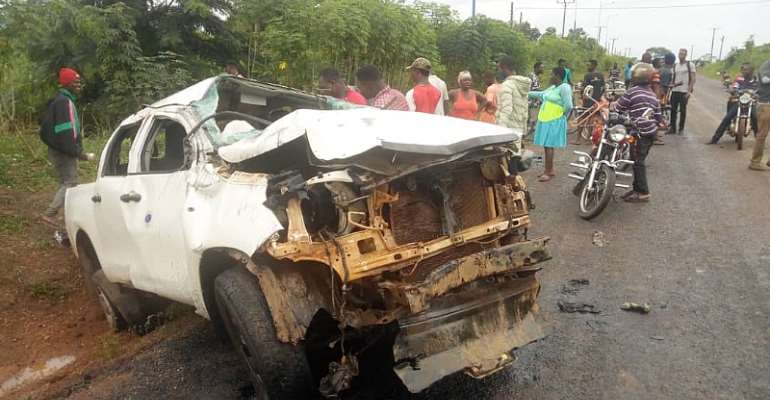 Residents and witnesses in Hohoe who had rushed to rescue victims of an accident involving a bullion van and a motorbike are alleged to have scrambled for money that had scattered from the van.

In all, about GH¢500,000 of the over GH¢ 700,000 cash being transported from Ho to the Hohoe branch of the Fidelity Bank could not be retrieved after the accident which claimed one life.

The accident occurred on September, 16 at a junction near Paloma, a suburb on the outskirts of Hohoe.

Some residents who spoke to DGN online said the accident which happened around midday attracted a large crowd. Fortunately, the occupants of the van, thus Driver, Police officer and a Cashier did not lose their lives unlike the motorbike rider who died.

The Hohoe Motor Transport and Traffic Directorate (MTTD) Commander, ASP Obeng Dickson confirmed to the media that the accident killed the motor rider; one Raymond Dodzi, a 28-year-old National Service Personnel on the spot.

He narrated that the Bullion Van (which is actually a pick-up truck) with registration number, GN 7144–17, belonged to Agate Dabot Company.

The truck which was transferring money from Ho to Hohoe via the Fodome route on reaching the crossroads (Junction) at the Paloma area in Hohoe met the motor bike rider from the Gbi-Atabu stretch of the crossroads.

Since the two were headed the same direction, the bullion driver attempted to swerve the motorbike rider and in the process, somersaulted several times after knocking the bike.

The occupants of the vehicle managed to get out with some injuries and yet went on to secure the scattered cash.

Unfortunately, onlookers who had gone to the scene outnumbered them and picked what they could while they called other friends and relations to the scene.

The three occupants of the Bullion pick-up truck have since been treated and discharged from the Hohoe Municipal Hospital.

Meanwhil, the MTTD department of Hohoe has lamented about the lack of vehicles to swiftly respond to emergencies and has appealed to the government, corporate bodies and other philanthropists to come to their aid.

He also appealed to all and sundry to make prompt calls, as the slightest delay could cost parties a lot of damage.