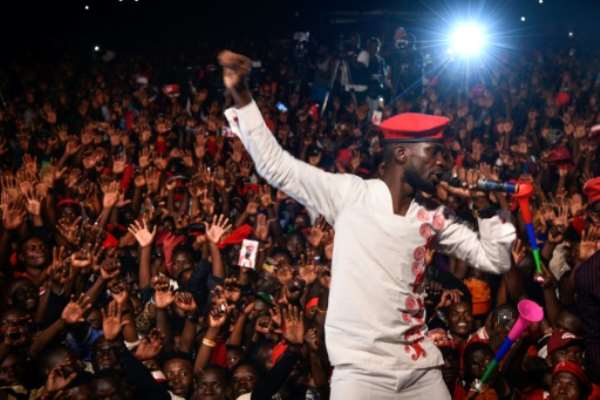 I don’t really blame Kyagulanyi aka Bobi Wine for the bad actions of those supporting him, but he kind of incriminated himself one way or the other. Peng Peng (based in Sweden), for instance, is on record saying that he now works for Bobi Wine after dropping NRM’s Brian White. Bobi was seen in the pictures with Peng, and the latter also boosted that they met and talked often. He has been instrumental in slandering whoever questioned Bobi's credibility.

Patricia Sewungu(based in the UK) has been making anti-Besigye posts on Facebook for the last 3 years—calling him a mole,’giant killer’, e.t.c, and guess what, her Facebook account is full of photos of her meeting Bobi in Kampala, or wherever they meet.

There was a time some guy called Jacob was being attacked on social media by PP supporters, Bobi came out and defended him, and they all shut up, but he never did that for Besigye, till recently. TV presenter, Kasuku of Spark TV, too, mentioned this in one of the shows I watched.

Bobi, himself, is on record making some flippant and disrespecting comments about Dr.Kiiza Besigye at the DP-block Reunion, basically, calling him a four times failure-- a message that echoed with what his bloggers, such as Fred Lumbuye(based in Turkey), Kakensa(based in Sweden), and several others, were selling on social media. It was the craziest political backstabbing I’ve ever seen considering Bobi kept claiming that he was friends with Besigye, and that he was his mentor.

He didn’t just stop there, he was several times hosted on several TVs and radio stations around 2018-19, and he kept telling people that his businesses were closed but some other people’s petrol stations were operating—something that forced Hon. Nambooze Beti, now belonging to NUP, to reveal that Bobi’s Petrol stations in Gomba, Butambala, were also working untouched by the state( Yes, this info is in the Daily Monitor somewhere if anybody wishes to search for it).

The attack on Besigye outside CBS FM in 2019 takes the tipping point, and it left most of us wondering who exactly Bobi’s working for. Thank God, that time, General Henry Tumukunde had not revealed yet that it was Gen.Saleh and other NRMs that mostly financed his coming to parliament. Creating a new, weak, and inexperienced face of opposition, would be political craftsmanship by Mr. Yoweri Museveni. Anyway, Bobi later issued a statement condemning it but the intended message had been sent out.

After Ashburg Katto dropped him for NRM, he revealed that they was a WhatsApp group of 9 'People Power' ‘generals’, where he( Ashburg) was a member, and Bobi( the admin) used to give them instructions to increase the heat on Besigye such that he gives way for him. Kato was removed from the group as soon as he went rogue and turned ‘yellow’.

So, as you can see, by extension, he is the man behind those bloggers that attack several people. The buck stops with him, and a lot of people are keenly watching him. This is the very reason why those who love Besigye will probably never like him in any shape or form, unless something miraculous happens. He kept quite over the propaganda against Besigye simply because it was self-serving, and that hurt deeply. Besigye is a very experienced leader deserving respect, and, to that end, Bobi’s silence over the attacks hurt so many of us.

The result of all this has been felt by almost everyone who has ever opposed Museveni.The bloggers insult, defame and blackmail whoever doesn’t support Bobi. His party, National Union Party, is sponsoring candidates against the people that have been opposing Museveni for ages. Bobi, himself, is shining but the opposition is generally floundering and needs someone to give it a mouth-to-mouth. Besigye has kept himself away from election, so far. It's safe to say that in four months’ time, Museveni will be sworn in as president again without any sweat, unless God intervenes.