A Taste of Ghana 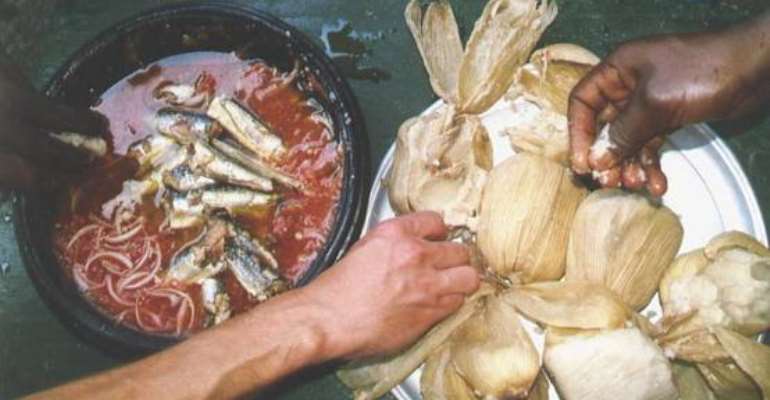 PEOPLE travel to Africa for history and for scenery but never the food. I don't get it.

I have found that Africa, with thousands of languages and cultures, each with its own cuisine, always rewards an adventurous eater.

Maybe the problem most travelers have is that finding good African food isn't always easy. Tourists are usually advised to stick to the hotel buffet. While a few countries, especially French-speaking ones like Ivory Coast and Togo, have developed an indigenous take on restaurant culture, many Africans prefer to eat at home. Barring that, they'd rather grab a bite on the fly. Even as a correspondent based in Africa, I am not always lucky enough to snag an invitation to eat at someone's house, so my main source of authentic African food is on the street.

And few countries reward the sidewalk chowhound as well as Ghana. From rough-hewn sheds, women sell sharp wedges of starchy yam, perfectly fried in splendorously saturated palm oil and slathered with a fiery sauce of pulverized Scotch bonnet peppers and garlic. From stainless steel bowls perched atop their heads, women dish out hearty bowls of perfectly spiced stew and rice, endlessly customizable with a plethora of condiments, from crunchy vegetables to a hard-boiled egg.

On a recent reporting trip to Ghana, I sought out some of my old favorites and discovered some new ones. In both cases, to find good street food you have to go where Africans eat on the run: bus stations, markets, busy intersections, construction sites.

"You have to look where people stop and rest a minute," said Eddie Nelson, a Ghanaian businessman and fellow street food devotee I met over a fistful of kelewele, a delicious snack of cubes of ripe plantain tossed in hot pepper, ginger and other spices, then fried until the sugar in the plantain caramelizes along the squared edges.

We were standing on a busy street just after sunset in Osu, a shopping district in Accra, next to Rosemary Nutsungah's kelewele shack. Ms. Nutsungah explained the secret to perfect kelewele.

"You got to have hot oil, that is No. 1," she said. "Then the plantain, it can't be too soft. It will drink the oil and become too oily. Also, you have to have very fresh ginger so it be sweet."

Mr. Nelson nodded approvingly, tossing cubes of plantain into his mouth from the crumpled newspaper in his hand. He then explained to me the finer points of selecting the right street food vendor.

"You have to look at the whole person," he said. "First, is her hair braided in neat rows, or does it go every which way? If it is neat, you are safe."

I put this wisdom to the test the next day on a trip to Kwame Nkrumah Circle, a roundabout at the heart of the city where thousands of minibuses converge, bringing commuters from across the sprawling metropolis.

Even in the chaos of honking horns and swirls of dust, it was evident that the street food business has a clear hierarchy and well-defined gender roles. At the top are the kebab sellers, always male, who sell a relatively high-end product because it contains meat, a prized addition to any meal. Ghanaian kebabs are a particular treat, called kyinkyinga. They are made of small, tender chunks of beef dusted with a spicy rub of peanut flour and hot pepper, dabbed with oil and then grilled over charcoal

Women sell any food that requires extensive preparation, usually from a container perched atop their heads. Fried yams, cassava and sweet potato all require slaving over a hot stove and skillful timing to get just right. Selling rice and stew from a basin perched on your cranium means rising early to make the food, carefully wrapping it in layers of plastic bags as a kind of homemade insulation, then carrying it all the way to the bus station and serving it up in banana leaves to hungry commuters.

I tried to follow Mr. Nelson's rules, but after a few minutes I was not looking at hair, because I was distracted by the endless array of food. There were fritters made of plantain just this side of too ripe, mushed up with some hot pepper and then fried. There were balls of fried dough spiced with a bit of nutmeg, crunchy on the outside and tender on the inside. I had to stop after the fried wedges of cassava served with a pepper sauce called shito, made of tiny shrimp ground with hot pepper and oil.

Then there are some sidewalk meals you can't buy at any price. I found one such feast one day in Elmina, a coastal city west of Accra, where the oldest slave fort in the country bristles on a peninsula jutting out into the Atlantic Ocean, the portal through which countless Africans were shipped off as chattel to the New World.

Wandering the old fish market as the sun set, I stumbled upon Aba Theresa Mensah, a fish seller who was winding down a long day of hawking octopus, snapper and prawns by making a little dinner for herself and the other market women.

The customary "you are invited," was uttered as I eyed her glowing charcoal stove, and I eagerly plopped down on a simple wooden stool. I spoke only English and she mostly Fante, but we managed. On a stone she ground plum tomatoes and Scotch bonnet peppers, which she stirred into bubbling pot of blood-red palm oil. In went some bits of seafood culled from the catch of the day — a bit of octopus, a couple of plump red snapper fillets, a handful of prawns and, finally, the secret ingredient — a scoop of saltwater from the Atlantic.

"We go chop now," she said with some satisfaction, using the pidgin word for eat. She motioned to a young girl carrying kenkey, fermented gobs of cornmeal wrapped in leaves, a sort of African take on polenta that is the staple starch in this part of Ghana, and purchased a few balls.

She sliced the kenkey onto a plate, then ladled on the juicy bits of fish and octopus swimming in a fragrant bath of spicy stew.

"Chop," she commanded. I dug in, the kenkey sticking to my fingers and the sharp heat of the peppers warming my skin. It is called Fanti Fanti, and it is as simple and delicious a fisherman's stew as anything the Mediterranean has produced.