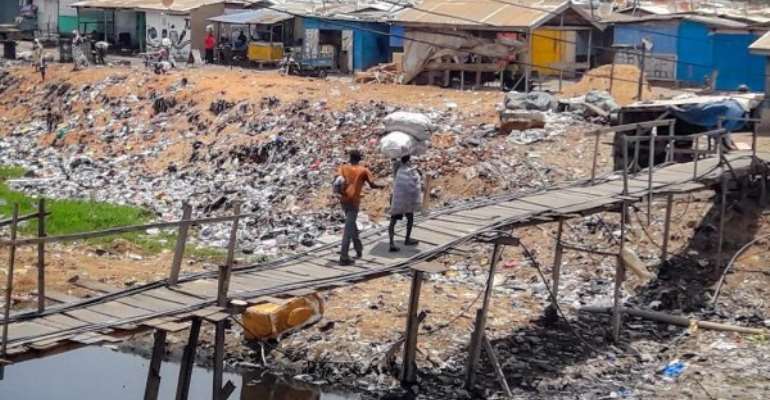 Slum dwellers at Old Fadama have appealed to philanthropists and corporate organisations to construct a bridge over the Agbogbloshie drain that runs through the area into the Korle Lagoon to facilitate movement to other adjoining communities.

Currently there is a makeshift dilapidated wooden bridge, which serves as a link for residents at the densely populated area, also known as Sodom and Gomorrah, to cross to James Town, Korle-Bu and other parts of the city for their economic activities to make ends meet.

Most of these people are into plastic waste collection, scrap dealing at Agbogbloshie, Ghana's largest e-waste graveyard, and selling of foodstuff at the Timber and Kokomba markets as their main source of livelihood.

In order to take advantage of the Accra Compost and Recycling Plant close to the area, serving as a major source of employment for community members, a bridge has become necessary to enable easy access to the Plant, without which the people had to go round the Hansen Road through the Korle-bu area before connecting back to their homes.

Kwabena Kessey, a youth resident in the area, in an interview with the Ghana News Agency, said: “We have to walk for about 1.5 kilometers to make our way around the area. This makes life difficult in our attempt to earn a living. Having access to nearby communities is critical to our livelihood”.

He said the Korle-Bu Polyclinic was where they accessed healthcare services but unless a better bridge was constructed the people would continue to suffer.

Adam Salifu, another resident, said: “The current bridge was constructed by an individual, who charges us 20p each time we cross, but it is now old and can collapse anytime.”

He, therefore, called on individuals, organisations and the government to build a permanent one to facilitate movement.

Mr Yakubu Abukari, an Entrepreneur at Agbobgolish, who built the bridge, said he decided to construct it in 2016 to give Sodom and Gomorrah residents easy access to other parts of the city, particularly to the Korle-bu Teaching Hospital to access health care.

He said there was the need to provide them with basic infrastructure to empower them to work hard and earn a decent living.

Mr Abukari said though the bridge was a source of livelihood to him because he charged 20 pesewas from those who patronised it, government should provide a permanent one to facilitate movement to enhance economic activities.

Mr Muntaka Chasant, a Social Entrepreneur and Philanthropist, who supports the youth in the area, said though Agbogbloshie was an infrastructure-poor area with an estimated 80,000 residents, it was an important economic hub serving the people of Accra.

“The residents here live in abject poverty and under deplorable conditions, without potable water and adequate infrastructure”.

“This is a classic example of urban poverty. The people need a bridge to link them to the outside world so they can interact and engage in social and economic activities”.

Mr Chasant commended Mr Abukari for his foresight in building the bridge that had helped to cut the travel time of residents by less than a third of the distance – around 2,070 metres – in order to access nearby areas and public transport.

He expressed the hope that individuals and corporate organisations would go to the aid of the people to support them with basic amenities to improve their standards of living.