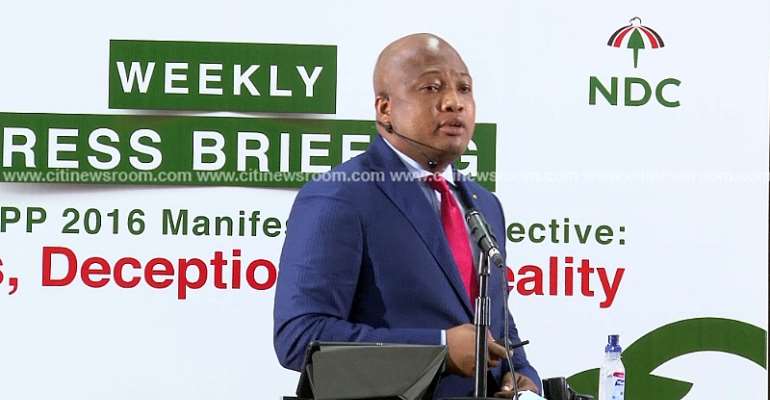 The Member of Parliament for North Tongu, Samuel Okudzeto Ablakwa insists the opposition National Democratic Congress (NDC) intends to make Okada safer by legalising and regulating its operations if it is voted into power in December 7.

“It is important that we legalise it to make it safer and regulate it. There is a huge business out there, and if we do it well, which we are committed to, it will thrive. The NDC has an entire blueprint on it,” he said on Eyewitness News.

Mr Ablakwa said this in response to a comment made by Vice President Dr. Mahamudu Bawumia who insisted that the okada business is risky and that the Akufo-Addo government has no plans of legalising it.

“You don't want to finish graduate school and then make a life from okada riding. You can have a better option, and we will give you a better option. So yes, we will not legalize the okada business in Ghana. It may be a tough decision but it is in the interest of Ghanaians. We are having discussions, but we will stick to our decision to provide a better alternative for the okada riders. Let’s give them an opportunity to buy safer vehicles through lease and pay over time. It is a better option than what the alternative is,” Dr. Bawumia said.

The North Tongu MP insisted that the Akufo-Addo government is out of touch with reality and has failed to realise the potential of the okada business.

“Clearly the government has lost touch with the people. There are many parts of this country where the year of roads has been such a hoax that only okada can take you to places. We are saying that in every society and country, there are different means of transportation. For instance, if you are in a traffic jam, okada will get you to your destination faster. There is the other reality about the essential services that okada provides, from the courier services which is legal.”

Section 128 (1) of the Road Traffic Regulations, 2012 (Legislative Instrument 2180), states: “The licencing authority shall not register a motorcycle to carry a fare-paying passenger.”

But flagbearer for the NDC, John Mahama, has promised to legalise okada should he be re-elected.

The promise has invoked an unending debate in Ghana.

Mr. Ablakwa on Eyewitness News further accused the Akufo-Addo government of not being consistent in its stance on the okada issue.

“Confused government with different positions, depending on who is called upon. I have heard top government officials such as Yofi Grant recently say that the government had plans to legalise the okada business even before we read our manifesto. So why the U-turn?”