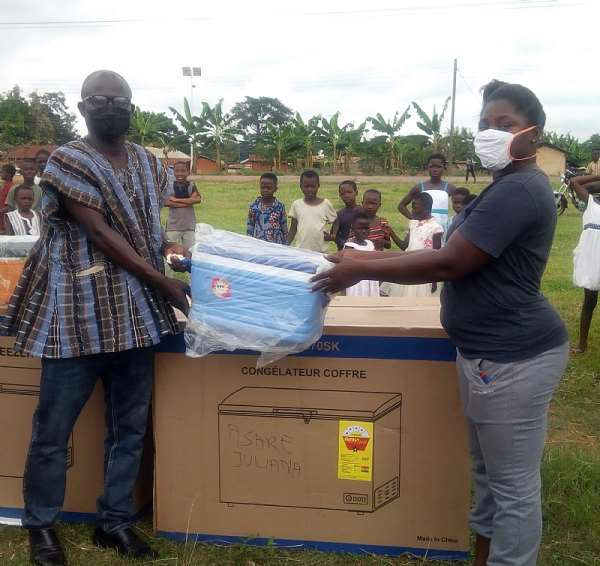 A total of 34 Persons With Disabilities (PWDs) in the Asutifi South District Assembly, Ahafo Region has received a number of supporting items from the government to enhance their living conditions.

The District Chief Executive (DCE), Robert Dwomoh Mensah, in his address expressed gratitude to the country's president for initiating a brilliant policy for PWDs since 2017 which is extremely impacting well in their lives.

According to him, the assembly has been able to support close to 500 PWDs and per checks, beneficiaries are doing well in live as compared to the previous government where monies were dashed to them as support.

He said constantly the assembly collaborates with the social welfare department to monitor with keen interest the activities of the beneficiaries to help them get the best out of the items received.

The DCE advised them to make good use of the items because the government has them at heart and want the best for them. He stated that the assembly will not take it lightly with any beneficiary found selling his or her item so therefore all must adhere to the directives of the social welfare department.

The District Director of Social Welfare, Martha Irene Plange revealed that her department is always in constant check on the items given to the beneficiaries in order to have value for money and also to better their lives.

She mentioned that PWDs in the district are doing well with their received startup kits because the directives given by the Social Welfare Department are duly followed.

On the next plan of the Social Welfare Department, Martha Irene Plange explained that the beneficiaries will soon receive training to give them an additional twist on how to earn more with their items supplied.

She cited an example that those with freezers to sell sachet water will have training on how to prepare products like fresh yoghurt and the rest which will fetch them additional money.

Some of the beneficiaries thanked the government for supporting them frequently to help improve their lives and also to make them feel that all is not lost per their conditions.

According to them, the policy initiated by this government for PWDs is the finest because massive improvement is recorded in the district so far as PWDs are concerned. They assured the executives of the district to make good use of the items to ' ginger ' them to keep on supporting them (PWDs) as expected.