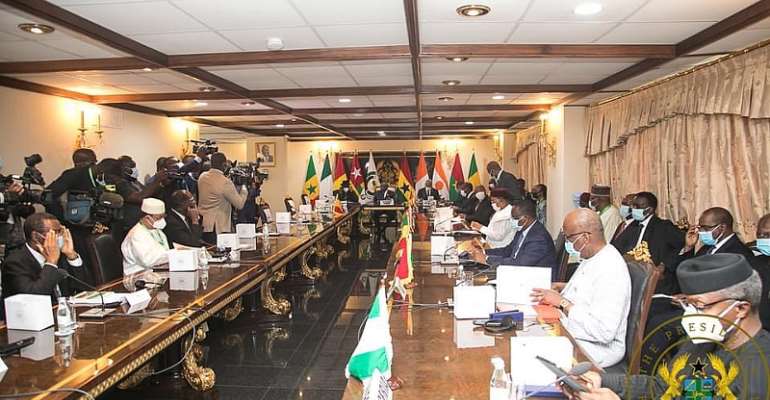 The leadership of the Economic Community of West African States (ECOWAS) has ordered the leaders of the Malian military junta to immediately hand over power to a civilian president and prime minister.

“In this regard, both the President and the Prime Minister of the transition will be civilians during the entire period,” subregional bloc stated, adding that the nomination of these two key personalities will be done immediately.

ECOWAS took the decision after a consultative meeting convened by Ghanaian President, Nana Akufo-Addo, and held on Tuesday, September 15, 2020.

In a communique from the meeting, ECOWAS took a number of decisions aimed at resolving the political crisis in one of its member states, Mali.

ECOWAS ordered for the immediate dissolution of the National Committee for the Salvation of the people of Mali (CNSP) which carried out the coup.

It assured that “once a civilian-led transition is put in place, ECOWAS will fully accompany the republic of Mali towards the restoration of constitutional order, in line with the relevant protocols of ECOWAS.”

It says sanctions on Mali will be lifted when the transition President and Prime Minister are effectively designated.

Inside the Malian crisis

It would be recalled that in the early hours of August 18, 2020, junior Malian soldiers started firing bullets into the air at a military base in Kati, a town 15 kilometres away from the capital of Mali.

After their arrival to Bamako, the Malian capital, the mutineers arrested Minister of Finance Abdoulaye Daffe, the Chief of Staff of the National Guard Mahamane Touré and Moussa Timbiné and the Speaker of the National Assembly.

Prime Minister, Boubou Cissé, At the time appealed for dialogue with them but the soldiers insisted to have sincere frustrations.

Later, a spokesman for the M5-RFP opposition coalition welcomed their detention, describing it as a “popular insurrection”.

Ousted Malian President, Ibrahim Boubacar Keïta, and other government officials including then Prime Minister were arrested and detained.

The meeting is coming off at a time when the opposition coalition which led mass protests in Mali ahead of last month's coup has rejected a transition charter.

The agreement followed three days of talks with opposition and civil society groups.

However, the M5-RFP group, which took part in the negotiations, observed that the resulting document was an attempt by military leaders to “grab and confiscate power”.

The group also stated that the document did not take into account what it said was a majority vote for a civilian interim leader, and “did not reflect the views and decisions of the Malian people”.

This is despite the fact the interim charter announced by the military leaders stating that an interim legislative body is to be established comprising M5-RFP members.

The ousted 75-year-old former president, it would be recalled, departed Mali last week for the United Arab Emirates (UAE) on 5 September for medical treatment.

That was after he suffered a minor stroke, according to military officials.