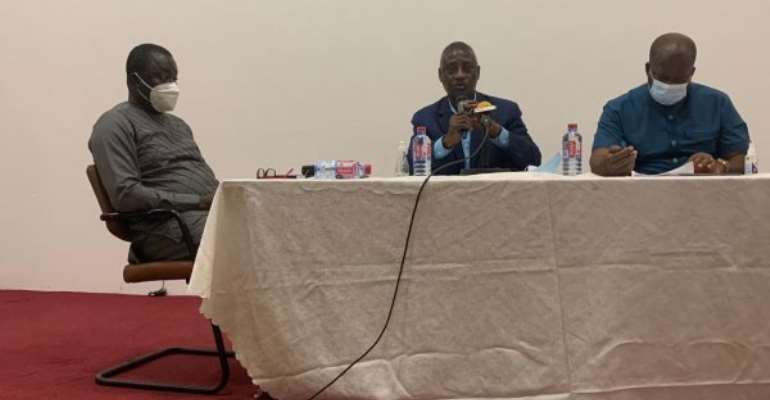 Ghanaians have been called upon to help the Electoral Commission rid the recently compiled voters register of any dead persons, minors, and non Ghanaians registered as the Exhibition of the Voter Roll begins nationwide.

According to Mr. Michael Boadu, the Director of Training at the EC, who made the appeal, the Commission, had put in place steps, which others have to follow to takeoff names of such persons out of the register during the exercise.

Mr Boadu stated at a day's dialogue with women, youth, and persons with disabilities on the exhibition of voters' registration.

He stated that the removal of the names of the deceased would require relatives to present the dead person voters identity card, death certificate, or burial permit to present.

The forum spearhead by the Gender and Youth Unit of the EC seeks to educate marginalise groups such as women, faith-based groups, and other identifiable associations, youth groups, and Person With Disability on the need to participate in the upcoming Exhibition exercise to avoid going through any stress on election day.

Mr Boadu explained that challenge cases of minors and non-nationals were classified as major change and would require the petitioner to fill a form and present evidence of the claim during the exhibition exercise.

“The fellow who have been challenged will be notified and asked to appear before the District Registration Review Office at a date to provide documentary and oral evidence to justify his inclusion or not,” he said.

He said corrections that would require the re-printing of voter's card is also considered as a major change, which requires that the applicant would be given a slip to go to the district office for it to be effected.

“Cases of a damaged card, missing cards, the inclusion of omitted names, change your name, age are also classified as major because one will have to present supporting details such as affidavits in the case of change of names to have it corrected,” he noted.

The commission he said would introduce a Short Message Service (SMS) platform, in which voters could check the accurateness of their information by sending their card numbers to the Short Code 1422.

Mr Boadu said voters who use the SMS platform and identify error would need to visit the district centers for the correction to be effected.

As part of the exercise, he said the Commission would test run 500 Biometric Verification Devises at some centres to check its function on an Election Day and the likely challenges to enable the Commission to find solutions to the issue that would arise.

Mr Samuel Tettey, the Chairman in charge of Operations, reiterated that per Regulation 23(1) of C.I 91 of the Public Elections Regulations 2016, the EC will exhibit the Provisional Voters Register for inspection by Voters at all 33,367 Polling Stations throughout the country from Friday, September 18th to Friday, September 25th.

He said the week-long exercise will run from 07:00 hours to 18:00 hours each day, including Saturday and Sunday saying, “The exercise will enable voters to authenticate their eligibility to vote by ensuring that their details correctly input on the voters' register”.

Mr Tettey encouraged registrants to visit their Polling Stations with their voter's ID cards to verify their details and verify Polling Station details ahead of Election 2020.

He said the Commission would enforce stringent safety protocols at all Polling Stations throughout the country including the compulsory wearing of face-masks, the use of hand sanitizers, and the observance of the social distancing protocols.

Gov’t in the process of buying bigger presidential jet – Eug...
7 minutes ago