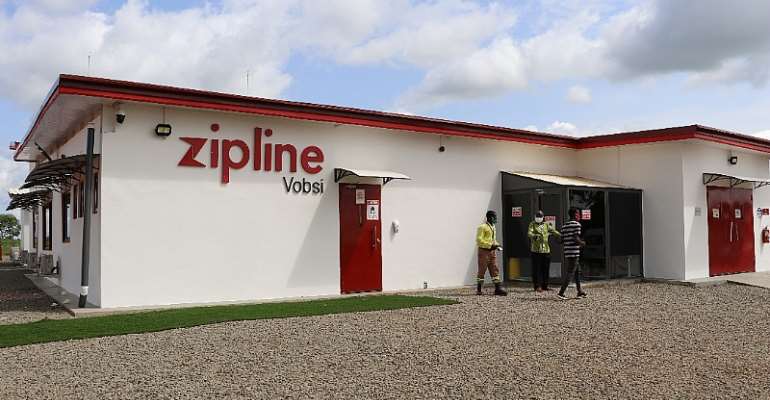 Fly Zipline Medical Drones have made timely and critical deliveries in blood and medical supplies to residents hit by flood disasters in the Northern region.

In some years past, the narrative was very disturbing since more lives were lost as a result of such natural disasters.

According to Zipline, it has also delivered a total of 122,000 units of medical commodities, including blood to over 1,000 health facilities across all four distribution centres in the country using the technology.

The company has also delivered blood samples, sanitisers and PPE to testing centres as well as some health centres in the country during the COVID-19 lockdown period.

The General Manager of Fly Zipline, Daniel Marfo made this known at the commissioning of the Vobsi centre, which is the fourth and largest distribution centre located at Kukua near Walewale in the North East Region on Saturday.

According to him, the centre will supply medical packages to health facilities in five regions in the Northern sector.

“Several other communities such as Sakogu and Fumbisi who during the rainy season have no access to medicines because of the state of their roads for the first time in years have access to the blood and medical products. As at 12 pm on Saturday, the Vobsi centre had already sent 40 packages cut off by the floods.”

Movement has been curtailed in parts of the region due to floods caused by weeks of torrential rains coupled with the spillage of the Bagre Dam in Burkina Faso. Gbintiri and Zorko health centres are just two examples of communities which without the services of the Zipline would not have access to medical supplies as they have been cut off.

Ghana adopted the medical drone technology to enable the country to expand healthcare access to millions at no capital cost to the state according to Fly Zipline. As a matter of clarity, the Ministry of Health engaged a fund-raising company to raise funds for the payment of the service.

Commissioning the facility, the Vice President, Dr. Mahamudu Bawumia referred to the technology as “Fly-To-Save-A-Life Project.”

According to him, this is just a testament of the desire by the ruling government not to leave anyone behind in the provision of basic healthcare needs of the people.

The Vice President recalled how the service made things easier for one Dr. Issabella Amese, the medical superintendent at the Baptist Medical Center at Nalerigu who urgently needed four (4) units of “O” frozen fresh plasma (FFP) at midnight to save the life of a woman who was in critical condition, and how Zipline intervened just on time.

“Stories such as this motivate us to continue to provide leadership for our people and investment in their lives so that we do not lose valuable lives as a result of non-availability of critical medical commodities,” the Vice President said.

He said the emerging success stories from the technology defeats prior misconceptions by opponents who criticized the technology during its introduction that the drones will take naked pictures of people in the bathrooms in the rural areas.

“Today, the many success stories on the ground have proven us right. Good governance and bold decisions such as this are what moves countries forward”, he said.

The four Zipline distribution centres can serve up to 2000 health centres operating at full capacity according to the management. The four centres include Vobsi in Walewale in the North East Region, Omenako in the Eastern Region, Mampong in the Ashanti Region and Sefwi-Wiawso in the Western Region.

Dr. Mahamadu Bawumia said, “in line with the many successes that are coming forth from the beneficiary communities, and our obligation to ensure that national resources and critical services are fairly distributed to all people living in Ghana, we may soon consider the need to expand this service by Zipline to all parts of the country.”