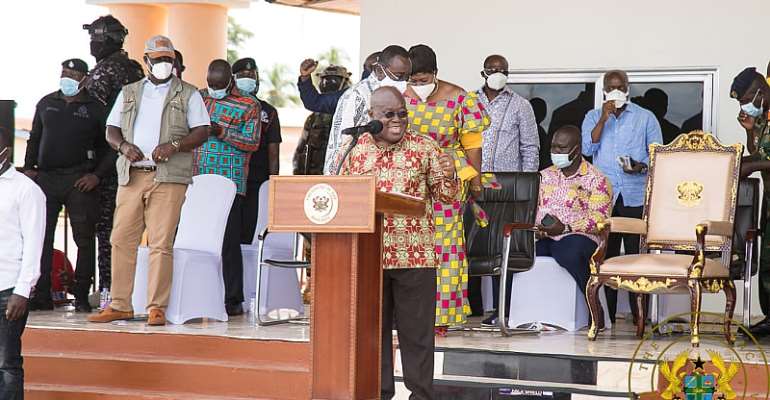 The President of the Republic Nana Akufo-Addo has reaffirmed his commitment to paying customers affected by the collapse of the infamous Diamond Microfinance Limited (DKM).

The president has dropped hints of the settlement of the matter by end of September. President Akufo-Addo pledged that all customers of DKM will be paid in full.

He was addressing a gathering of Chiefs and people of Wenchi in the Bono Region as part of his presidential tour, the President stated that everyone who was owed money by the microfinance company will receive payment.

“By the end of September, everyone who was owed by DKM will be given their money,” he said.

President Akufo-Addo added that the payments were not going to be done in installments but rather all creditors will be paid in full.

“We are going to make sure that all balances are paid in full. We are not paying in percentages like Mahama’s government,” he assured. Background

In 2015, some microfinance companies in the Brong Ahafo region found themselves in a mess, following accusations that they squandered the deposits of their customers.

The central bank in 2015 suspended the operations of DKM for violating the Banking Act.

Though the central bank subsequently lifted the ban on the company's operations, DKM was unable to pay its customers their locked up cash.

According to then-President, John Mahama, and his Finance Minister, Seth Terkper, DKM Microfinance had spent about GHS 77 million of their clients' monies.

President Akufo-Addo in his campaign towards the 2016 elections assured the clients of these companies that he would retrieve their locked-up monies for them when he is voted into power.

The Bank of Ghana confiscated the assets of the company and appointed the Registrar General's Department to commence liquidation processes to refund customers of the company.