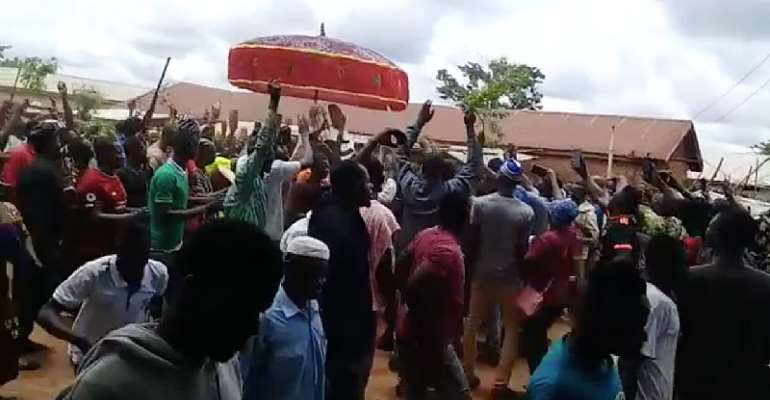 Reports emanating from Karaga in the Northern region point to a ticking time bomb pending explosion owing to chieftaincy litigation after the installation of two chiefs in the town.

Karaga traditional area in the Northern Region is in total disarray due to the tensions being fueled by the current situation.

On Friday, the Overlord of Dagbon, Yaa-Naa Mahama Abubakar II enskinned one Abdulai Natogmah as the new chief of Karaga following the successful performance of the funeral of the late chief.

This caused tension in the town as residents in the area mounted roadblocks to prevent the chief from entering.

The people say they do not want the chief endorsed by the Yaa Naa and that they were not going to allow him into the town.

The people of Karaga also complained that he is the son of the former Yaa Naa Abdulai Bila, from the Abudu gate.

Subsequently, on Saturday morning, one Mahama Sumani has also been installed by the people of Karaga as the chief they prefer.

He has since occupied the traditional palace in the town and has started performing some rituals.

There has been Quranic recitation in the palace for his successful installation.

The new chief by the Yaa-Naa is yet to find his way into the town.

Police and military personnel have been dispatched to the area. Background

The Dagbon state has three gates; the Andani gate, Abudu gate and the Mahami gate.

These three gates used able to ascend to the Overlord skin Yaa Naa.

But the Supreme Court changed this with a ruling that the Yendi skin could now only be occupied by the Abudu and Andani gates.

Karaga was then reserved for the Mahami gate.

But following the restoration of peace at Dagbon, there have been suggestions people want the Mahami gate to relinquish its claims to Karaga.

The Mahami family however held a press conference to state that they were not going to allow Karaga to be taken from them.

But this stance is being threatened by the enskinment of Abdulai Natogmah Abdulai as the new Karaga Lana.