Murder Of US Pastor's Wife: The Threats Were Boldly Written On The Wall 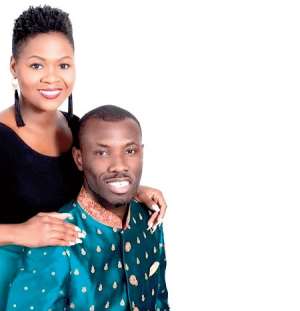 The fallout from the cold blood murder of the Ghanaian pastor's wife in the USA appears that the threat to kill her was clearly written on the wall after videos and audios of various confrontations of the abusive marriage surfaced on social media.

In some of the scenes from the videos, these were some of the threats captured by the killer husband:

“If I don't kill your sister then I am fake,” a United States-based Ghanaian pastor who gunned down his wife has been captured in a video telling some family members of the deceased.

A video of the alleged chilling threats by Sylvester Ofori has gone viral on social media. In the said video, a scene has been captured where brothers of the deceased, Barbara Tommey also known as Barbara Ofori, appeared to be confronting the suspect, who is now in police custody, for domestic abuse.

A first video popped up showing a loving couple during their wedding ceremony, but the second video appears to show the tension in the matrimonial home which reveals the abuse and death threats Barbara received from the husband.

In the chilling video, Barbara and her siblings had gone to what looked like her marital home to retrieve 'some documents'. Things then escalated when the suspect attacked the woman in the presence of her siblings, one of whom was filming the whole incident.

A man believed to be a brother of the woman looked enraged in the video and tried to confront the suspect.

He was seen in the video restraining the suspect and keeping him at bay from attacking the woman.

In the ensuing argument, the woman's brother accused the suspect of being a fake man of God, and the suspect retorted in an angry tone that “if I don't kill your sister then I am fake.”

Barbara was told to report the matter to the police but she refused, insisting she didn't want to “escalate the issue” any further.

It is unclear when the video was captured, but Barbara was gunned down by the suspect a few days later according to those who know about the couple.

The victim, 27, an employee of Navy Federal Credit Union, was shot and killed at the Garden Parks Boulevard, west of John Young Parkway and north of the Mall at Millenia when she arrived for work that morning.

It is not clear what might have triggered the callous incident which has since set major American media outlets in motion.

Orlando Rolon, City of Orlando Police Chief, said suspect Sylvester Ofori was apprehended and taken into custody after a search warrant was served at his apartment.

According to him, the bloody incident was captured on a surveillance video and added that Ofori took off from the scene immediately he shot the wife as the woman collapsed thereafter.

“You can tell (from the video) that she was trying to get inside (the credit union). Unfortunately, he shoots her,” Police Chief Orlando Rolon narrated and continued that the victim appeared surprised by “what was happening.”

Fighting your husband's side chicks is wrong; you could even...
49 minutes ago