Trusting local knowledge: the case of fire management in a Namibian park 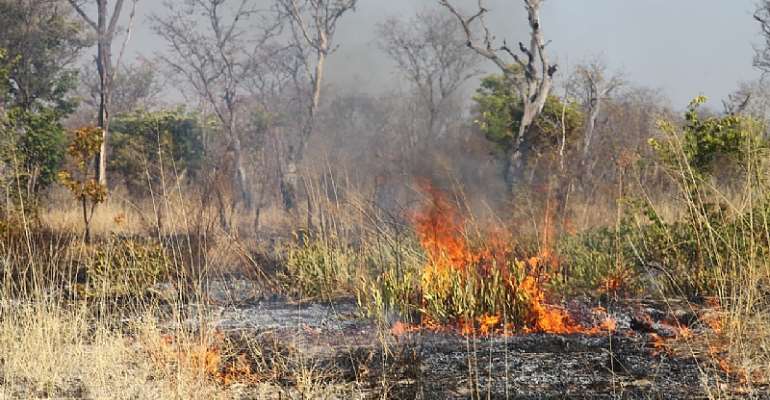 Fire and humans have a long history in African savannas . Fire management has played a role in maintaining biodiversity and in the livelihoods of rural communities . One example is when rural people in west African savannas in Mali burn a “seasonal mosaic” in the landscape. A combination of unburned, early burned and recently burned vegetation reduces the risk of more dangerous fires late in the season .

This type of burning also protects and increases biodiversity. And it enables rural people to hunt animals, gather plant foods and regenerate grazing for cattle. Understanding this history is useful when managing contemporary fire regimes .

The Bwabwata National Park in north-east Namibia has a long and complex history of fire management. The park lies at the centre of southern Africa's Kavango-Zambezi Transfrontier Conservation Area . The park is unusual in that people live in it alongside wildlife, unlike many conservation areas where people have been excluded from the landscape. People living in the villages use areas zoned for subsistence in the form of livestock and crops, and sourcing wild resources like edible and medicinal plants. These areas also host community-based tourism projects and trophy hunting enterprises.

Both the Khwe-San (former hunter-gatherers) and Mbukushu (agro-pastoralists) used fire as part of hunting and agropastoral practices in the area for millennia . These traditions were disrupted by colonial occupation because of a belief that they were damaging to the environment. .

Managed burns have only recently been reinstated formally in policy . The government now encourages the use of burning for management purposes early in the dry season to prevent the spread of large fires in the late dry season.

We carried out research into how, when, why and where people have used fire in the park. We believed it would help to integrate local ecological knowledge with today's ecological management practice.

Based on our findings , we argue that understanding this history is crucial to designing effective fire management to maintain biodiversity and support the livelihoods of people who live in the park.

Fires were banned in Namibia for over a hundred years (1884 to 2005), under colonial policies and in the early years of independence . This was because fire was largely misunderstood by the government. The belief was that the traditional burning practices of the Khwe-San people were unsustainable and damaging, especially for large valuable trees used in the forestry sector for railways, mines and timber production . The banning of local fires disrupted practices central to people's subsistence, culture and their way of life.

Before independence in 1990, this area was exposed to decades of war, political and inter-ethnic conflict and deforestation . It resulted in pressures on diminishing natural resources for rural communities. During the Namibian independence struggle (1960s-1989), the South African Border War took place in the region and the park was used as a military training ground . A Khwe-San woman collects false mopane seeds for the pot from a tree above a burnt patch of grass. Glynis Humphrey

The Khwe-San people, renowned trackers and formidable hunters, were employed by the South African Defence Force as soldiers . These socio-political circumstances disrupted cultural fire practices over a period of three decades.

After Namibia's independence in 1990 , political focus shifted to the tensions between pastoralist and former hunter-gatherer communities, as well as the need to sustain local livelihoods alongside nurturing an international tourism industry. Still, colonial policies of fire suppression persisted, and fires were only permitted again in 2006 .

In our study, we surveyed the Khwe-San and Mbukushu communities, park management and fire focused stakeholders. These included government staff responsible for the Namibian wildlife and forestry sectors, non-governmental organisations, academic researchers and environmental consultants. We found that most people preferred the use of deliberate fires, set early in the dry season, to policies of fire suppression.

This finding highlights the importance of the consideration of cultural fire knowledge, history and diverse management perceptions. The confluence of indigenous fire practices and modern fire policies could benefit local fire management relations, as the local people have always been blamed for unfavourable fires in the park. It turned out that fire doesn't need to be a source of tension in the park because all the stakeholders actually agree on best practice.

Our study revealed how today's fire management policies have roots deep in human history. Until recently, local burning knowledge and practices have been largely unrecognised by national government officials in southern Africa.

We found that the Khwe-San's knowledge of traditional burning practices has been passed down over many generations. Fires started early in the dry season (April to July) encourage the growth of edible plants, an important food resource. Fires were also used by the Khwe-San for healing ceremonies, to open up dense stands of vegetation that could harbour dangerous wild animals, to remove parasites, control diseases and sustain habitat for medicinal plants. Importantly, these early season fires help to prevent large late season fires that cover wider areas and burn more intensely.

The Mbukushu people use fires early in the dry season to regenerate grasses for livestock, and late season (August to November) fires to prepare fields for growing vegetables in the rainy season. Not all fires are perceived as good, as sometimes fires used in crop fields cause “runaway” fires in the park . But the use of fire in the late season is a critical component of food security for people living in the park. Fire in the late season is necessary for growing crops but negatively affects wild food resources in the park.

Today, controlled fire is generally accepted as an ecological tool to manage vegetation and help determine where and when wildfires happen. As the Khwe and Mbukushu people know, burning off patches of grass in the early dry season reduces the spread of hot fires late in the season when the grass would be very dry and ignitable, and ambient temperatures are high.

Modern scientific studies have also found that cooler fires in the early season result in partially combusted grass and therefore release less carbon into the atmosphere. This means they can potentially lessen the contribution of fires to global climate change .

Our study highlights the often-neglected importance of indigenous knowledge in fire management. The hope is that traditional practices are respected and properly acknowledged by policymakers and managers in the future.

It is also important to understand and acknowledge the history and cultural dynamics of fire, alongside the reasons people use fire. This is critical for managing fires in the future.