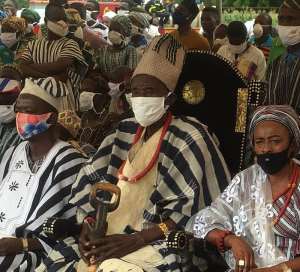 The Paramount Chief of the Jirapa Traditional Area, Naa Ansoleh Ganaa II has appealed to the government to revisit all abandoned projects in the area and ensure they are completed to save the tax payers money from going waste.

According to him, the delay in executing the project is impacting negatively on the socio-economic development of the Jirapa municipality.

Naa Ansoleh Ganaa II said this at a durbar organised to welcome the Vice President, Dr Mahamudu Bawumia, as part of his two-day campaign tour of the Upper West region.

Spokesperson of Naa Ansoleh Ganaa II , Justice Donlabong Dinaa called on the government to, as a matter of urgency attend to the abandoned projects.

”Work commenced on the projects, but we are not happy about the slow pace of work. Some have even been abandoned. Therefore, we want something to be done about it so that they can speed up work and complete the projects without any further delay.”

He cited the Jirapa town roads, a dormitory block at Jirapa SHS as well as an abandoned administration block at the St. Joseph's Hospital as some of the key abandoned projects in the area.

Residents within the municipality have over the years been calling on various governments to complete abandoned projects.

The assemblyman for the area, Pognilubo Peter Dapilah, in 2019 bemoaned a rural electrification project that was started in 2011 by the then NDC government that never got them.

“Ever since the last extension was done in 2011 under Prof. Mills, several calls had been made on subsequent governments and NGOs to help curb the situation but all had proven futile,” he said.

He also added that “we have on several occasions, written to the Municipal Chief Executive about our problem but have received no positive response yet”.