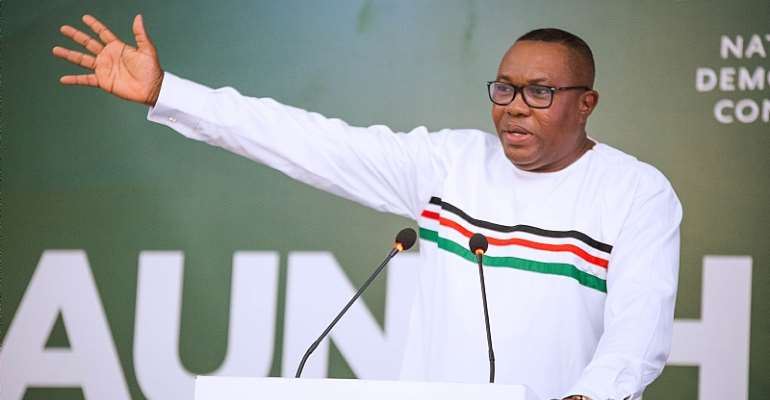 A careful scan through the excerpts of the manifesto launched by the NDC reveals it is indeed the brainchild of the people. It does not contain a classic vision of a prospective President who plans to make positive impacts in his return to the Presidency. The manifesto items are particularly general and lack specificities.

This article analysis some selected aspects of the manifesto that affect various sectors of the economy. The discussion focuses on selected items in the manifesto: fixing the economy, promoting human development, providing infrastructure for Accelerated Growth, creating sustainable and decent jobs, good governance, anti-corruption and accountability. The selected sectors will be weighed thoroughly, by assessing the potentials and threats of the policies covering those sectors. Below, the selected sectors are discussed:

In fixing the economy, the NDC plans to introduce a knowledge-based economy for developing the talents and skills of the people. How is this going to be done? Will the party do this through entrepreneurship or skills training and by what means? The mounting public debts experienced currently is not caused by reckless borrowing. It is occasioned by the debts the previous NDC government took. The Kuffour administration did not borrow as much as the previous NDC government. HIPC ensured cancellation of debts. Currently, interest payments are more than capital expenditure due to the debts accumulated previously. The NDC is noted for pursuing contractionary monetary policies. How will inflation be reduced with the intentions of expanding the economy? The promise of sanitizing the financial sector is a figment. The financial sector was poorly managed under the NDC. Regulatory bodies were lax in their duties and that allowed for the development of many Ponzi schemes.

Job creation is a responsibility of governments in many developing countries. The Edwuma Pa plan has no specific targets for the creation of jobs. The sectors of the economy to be utilised in creating these jobs have not been identified in the manifesto. It will be helpful if specific sectors are used in the creation of the jobs.

Human development is key in modern public policymaking. Education and health are important in activities and policies that spur economic growth and development. The double track of the Free Senior High School cannot be eradicated easily. In fact, it is the solution to the infrastructural challenges of the education sector presently.

The NDC built 47 E-blocks, with support from the World Bank, in its four years of government. It is not feasible to provide all the infrastructure needed at the various schools given the rate of increase in enrolment.

It should not be the concern of the state to pay for the private tuition of students. There are not limited opportunities for parents to educate their wards in public institutions. It should be a choice between public and private tuition for parents and not the concern of the state. Including the private schools will make the policy and programme unsustainable financially.

The provision of infrastructure is the desire of every government in this era of modernity. Governments that intend to industrialise their economies plan to embed infrastructural development in their industrialisation policies. The ‘Big Push’ sounds viable on paper, theoretically, but there are aspects of it that will make it particularly difficult to achieve practically. The sources of financing the project have not been indicated: is it private sector-led or a full public sector project or a partnership?

It is an extremely ambitious project which cannot be achieved in four years. It has the likelihood of adding to the mounting public debt. The successful achievement of this goal will ensure more developed infrastructures in the country. The project cannot be achieved by relying on funds from the public sector. Even the HOPE city project initiated in the past failed and there is no hope for the realization of this goal eventually.

The creation of sustainable and decent jobs is not the sole responsibility of governments. The government can provide an enabling environment for the private sector to participate fully. The promise of legalizing ‘Okada’ as a business for the youth is not suitable for a promising industrial economy. The private sector can be supported to launch a revolutionary policy in the transportation sector by contracting automobile companies to manufacture small cars for use instead of using ‘Okadas’. The party should assess the opportunities and threats of legalizing ‘Okada’. The policy on creating decent and sustainable jobs should target the agricultural, industrial and manufacturing sectors. These are areas where decent and sustainable jobs can be created.

The item on good governance, anti-corruption and accountability indicates the willingness of the party to address the canker of corruption and nepotism. This country witnessed more corrupt acts in the administration of the immediate past NDC government. The party and its Presidential Candidate did not outline the use of state institutions in achieving this goal. Apart from resourcing the state institutions to fight corruption, there should be political will to allow the institutions to function. In the past NDC administration, the law enforcement machinery was kaput. In the Woyome case, there was no political will to fully investigate and prosecute political appointees.

The procedures to ensure public office holders account for their stewardship are not indicated. The use of Ghanaians as watchdogs to curb corruption cannot be effective. Transparency in public business deals through open procurement procedures and processes will help reduce corruption activities.

The party plans to pay Assembly members to motivate them in carrying out their duties. There is the need for legislation for this goal to be achieved. The party did not indicate, in its manifesto, how the payment of the salaries will be effected. The Assemblies can be strengthened for them to raise revenues internally to remunerate their members. There will be much financial burden on the purse of the state in this regard. Giving allowances as a form of compensation to the Assembly members is more feasible.

The party failed to tackle the issue of electing MMDCEs, which gained much attention in the country. The election of MMDCEs occupies a very important place in the decentralisation agenda of the state. To ensure proper public accountability, the executives at the grassroots should be subjected to effective control by the local authorities. The appointment of MMDCEs cannot guarantee this and the dictates of the constitution.

The policy document of the NDC contains items that cannot be achieved within a term, four years. The reason is, many of them have no specific sources of funding or time periods for achieving them. The ‘Big Push’ project cannot thrive on public financing if it is an off-balance sheet item.

Eradicating double track within a year or two is not feasible if the Free SHS Policy will be expanded to capture those in private schools. The party need a review of its policy document if voted into power for the manifesto appears suitable for a development plan and not a term of a government.