Bawku Central: NPP PC To Focus On Women And Youth Empowerment If Elected 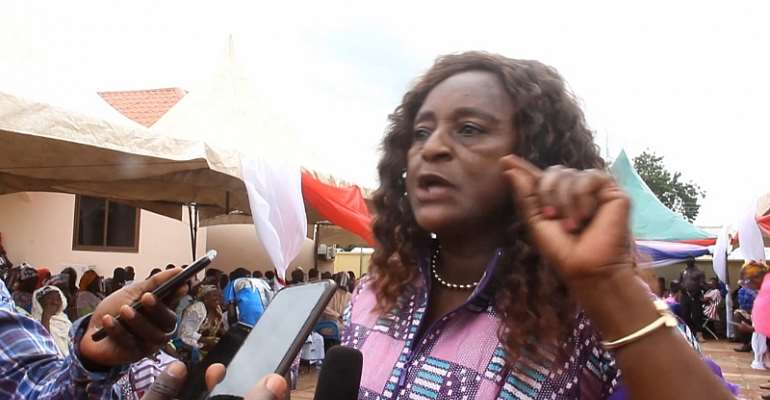 The New Patriotic Party (NPP) parliamentary candidate for Bawku central and General Manager of the Produce Buying Company (PBC) Shea Processing factory in Buipe Madam Gabiana AGbanwaa Bugri has said, her focus will be on the youth and women empowerment to equip them with skills to manage their own economic activities.

Madam Gabiana said, in her small way she was able to train some women groups on soap making, batik tie and dye among others.

According to her, when given the nod to represent the good people of Bawku central, she will make sure women and the youth will be given jobs.

She however said, winning the Bawku central seat is possible with a call on party executives and members as a matter of urgency to sink down to the homes of the electorates to canvass for votes to win massively in Bawku central come December 7.

She called on for peace and love during, before and after the general polls.

The Council of State member and party elder, Alhaji Sulemana Yirimeah, called on the constituents to give Madam Gabiana a chance to represent Bawku central for more projects and programmes.

Mr Yirimeah warns against acrimony, names calling but campaign based on issues and records.

He added that with her as NPP Member of Parliament for the area, the constituency will witness more developmental projects.

Alhaji Hanan Abdul-Wahab Aludiba, Chief Executive officer of buffer stock said the party has a message for the good people of Bawku central and Ghana at large.

According to him, one village one dam, one constituency one million dollars, free senior high school programme among others are programmes the government introduced within his first term in office and many more will be enrolled when given a second term.

Alhaji Aludiba said, the New Patriotic Party in 2016 didn't have evidence message for the people of Ghana but yet they won the 2016 election with over one million difference against the then ruling National Democratic Congress.

The Upper East Regional chairman of the party Anthony Anamoo called on Bawku central NPP to forgive one another and unite for the victory of the party.

Lawyer Namoo, however, called for forgiveness from various party members in the constituencies especially defeated parliamentary aspirants to unite towards winning the parliamentary seats.

The NPP has only three parliamentary seats in the upper East Region namely Navrongo central, Zebilla and Tempane constituencies whiles the opposition NDC has 12 seats.