…But GWCL Officials Covering Up 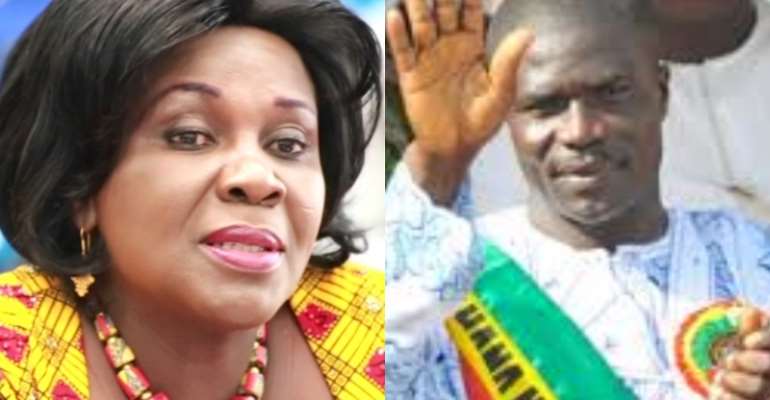 Residents of Mataheko, a community in the Ningo-Prampram District, are demanding justice and action from the Ministry of Sanitation and Water Resources after it was confirmed a farmer in the area used pipe-borne treated water to fill dams on his farm.

The inhabitants are calling on the sector Minister and the MD of Ghana Water Company to prosecute the perpetrator for denying them good source of drinking water till date.

Information gathered by this portal indicated that the Minister of Sanitation and Water Resource, Madam Cecilia Abena Dapaah, early March inspected two dams suspected to have been illegally created with treated water on the farm of Reverend Lemuel Martey, 2012 National Best Farmer.

The Minister, after the inspection at the farm located at Afienya- Mataheko Rice City in the Ningo-Prampram District, instructed engineers of the Ghana Water Company Limited (GWCL) to take samples and retest after which investigations and the needed actions would be taken.

She said at the time, “We heard they had tapped GWCL treated water for the dams and therefore we came to check. Some samples have been taken for testing, if there is any criminality, the law will take its full course.”

She stated that it was a serious issue, as according to her, using treated water for a dam meant depriving a number of households of treated water.

Engineer Clifford Abdallah Briamah, Managing Director of GWCL, who together with other District Managers accompanied the Minister for the inspection, disclosed that previous test by his outfit on the smallest of the dams revealed that it contained chlorine treated water, which was a confirmation of assertions that GWCL water was the main source of water for the dam.

Engineer Briamah said, “Both reservoirs are believed to be filled with treated water, the first test we did on the small dam showed traces of our water.”

Samples, he said, were also taken to the Ghana Standard Authority (GSA) and other independent agencies to also test for confirmation to ensure that the right investigations are done adding, “This is not only about GWCL but a national security issue as they are depriving huge numbers of people from getting the needed treated water.”

At the site, Mr Albert Nortey, elder brother of the 2012 National Best Farmer, who took the entourage round the farm, claimed the dams were created by their mother some 40 years ago adding that it contained rain water.

The dams, he indicated, are being used for fish farming and rearing of cattle saying most of the farm lands have been sold for residential purpose.

Investigations, however, revealed Reverend Lemuel Martey, had dammed the water from GWCL sources upon the confirmatory test.

The people of Mataheko who have been denied good source of drinking water till date are asking for justice.

They are calling on the sector Minister, Cecilia Abena Dapaah and the MD of Ghana Water Company to give them justice by prosecuting the man of God crimes against humanity.