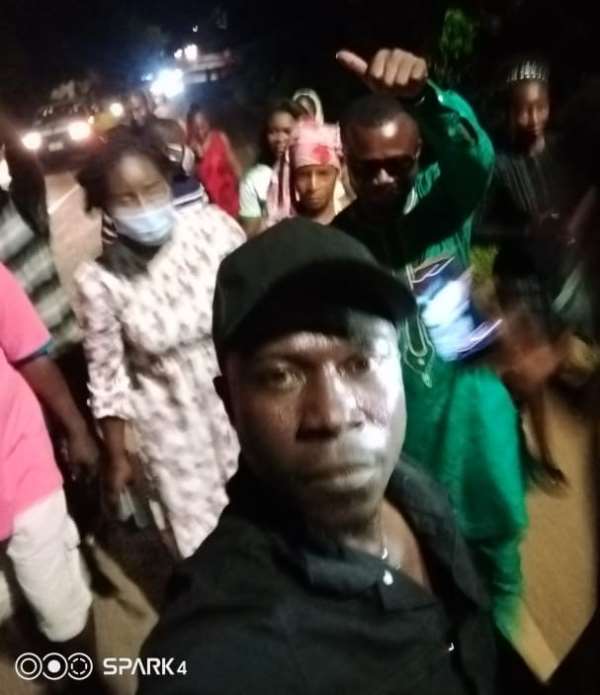 Constituency and polling station executives, as well as some supporters of the opposition National Democratic Congress (NDC) on Friday evening, besieged the New Abirem Police station in the Eastern Region to demand the release of Mavis Ama Frimpong ex Eastern Regional Minister now Parliamentary candidate for the area, the Constituency Chairman and four other supporters arrested over campaign posters.

The six were arrested for allegedly defacing and removing posters of the ruling New Patriotic Party (NPP) and replacing them with Posters of NDC Presidential Candidate John Mahama and the Parliamentary candidate for the area.

The New Abirem Constituency Secretary of the NDC Daniel Odzeyem narrated to Kasapa News that “Our constituency Chairman asked our boys to paste posters of John Mahama and Our Parliamentary Candidate. So we were there when NPP Organizer called me on the phone that our boys were covering their posters with NDC Posters. So the Police Commander Superintendent Peter Ofori Donkor called us that the DCE for the area and NPP Secretary have lodged a complaint that they should arrest our boys so we said we will bring them for interrogation. After the interrogation, the CID in Charge decided to grant the four guys bail but the DCE for the area resisted granting of bail to the guys.”

He continued: “Then operation Vanguard team violently arrived at the Police station arrested our Chairman and seized his phone, fired warning shots which the pellet hit one of our supporters. When our parliamentary candidate got there to help secured bail for those arrested, the Police Commander ordered for her arrest and put her at Counter back without any wrongdoing. This Commander was the same Commander transferred over the missing Takoradi girls issue who is being influenced by the NPP here.”

The six were subsequently granted bail as more supporters trooped to the Police station.

The former Regional Minister Mavis Ama Frimpong in an address to the supporters of the Party shortly after their release asked them to remain calm.

She also assured the Armed Police Officers deployed to the Police Station that “the Police is supposed to be our friends, not our enemies so once the issue has been resolved we don’t have a problem with you.so thank you.”

When contacted, the Birim North District Chief Executive Raymond Nana Adamptey denied the allegation of his involvement in the arrest and resisting of bail.

He also said, he was briefed as the Chairman of District Security Council (DISEC) that only three out of four NDC supporters who committed the act were arrested denying the claim that the former Eastern Regional Minister was also arrested.

A statement issued last night by the Eastern Regional Secretariat of the NDC under the signatory of the Regional Communication Director Darlas Ampomah Williams Stated that “the Police Commander who is supposed to act professionally per the code of ethics of the service, has thrown the laws of the land to the dogs, forgetting that his allegiance is to the state and not the governing party.”

The statement said ” We are by this release demanding the immediate release of our Parliamentary candidate, and the other four executives within an hour or let the world blame the police commander and the District chief executive for any disturbances in the Abirem Constituency.

“We are also asking all members and sympathizers of the NDC in the Abirem Constituency, and the adjoining constituencies to converge at the Abirem district police station until our members are released.”

The party sent a strong ” note of caution to the Police commander and all errant police officers in the region that, the clock is fast ticking for the tables to turn and the day of accountability will catch up with them soon”.

Nurses, teacher trainees who completed their training in 201...
13 minutes ago