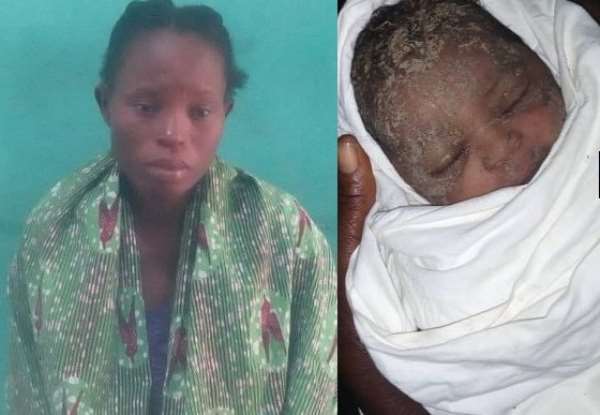 A woman who buried her newborn baby in a bush at Ekowkurase in the Ajumako Enyan Essiam District in the Central Region is in the grip of the Ajumako Police.

The suspect, Rita Mensah who’s a mother of six, according to her family is mentally sound.

Her mother-in-law in an interview stated that they had been asking her about the whereabouts of the baby but she kept on insisting that she didn’t know where the baby was.

Police investigations led to her arrest.

The Ajumako Enyan Essiam DOVVSU Commander, Rita Wilson in an interview stated that upon visiting the scene the Police conclude that the suspect intentionally decided to kill the baby, hence she’s been charged with attempted murder.

She added that investigation is ongoing and the suspect will soon be arraigned before court.

An unidentified woman has buried her newborn baby girl in a bush at Ajumako Ebowkurase in the Ajumako Enyan Essiam District in the Central Region.

Information gathered by Kasapa FM News Yaw Boagyan indicates that some young men who had gone to the bush suddenly heard the shrill cry of a baby.

Though alarmed, they inched closer to where the sound was coming from, only to see a spot that appeared to have been dug and covered with lots of sand.

The young men then rushed and informed some elderly people in the town about what they had discovered who rushed to the scene. The sand was cleared from the spot and fortunately, the baby who was alive.

She was retrieved and sent to the Abura Dunkwa Government hospital for treatment.

A search is currently ongoing to identify the mother of the baby and cause her arrest.

The Ajumako Enyan Essiam District Social Welfare Officer, Abena Serwaa Opare indicated that the baby will soon be taken to an orphanage home after receiving treatment.