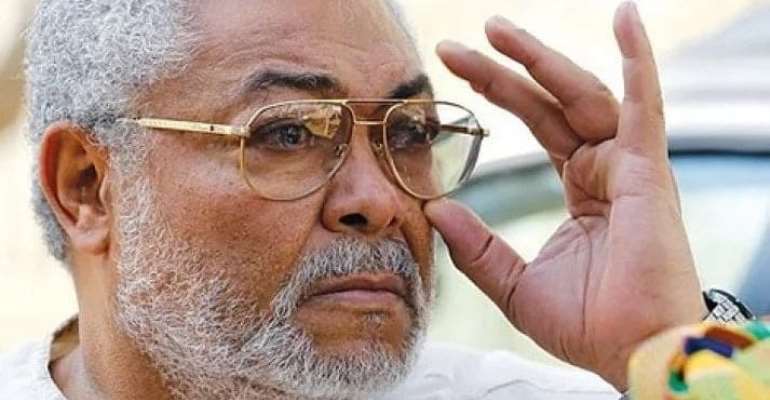 Ex-President Jerry John Rawlings has hit hard at National Democratic Congress (NDC) stalwart, Professor Kwamena Ahwoi over the latter’s supposed ploy to misrepresent the relationship that existed between the NDC founder and the late John Evans Atta Mills in the run-up to the 2008 general elections.

It will be recalled that Mr. Ahwoi in his controversial book “Working with Rawlings,” accused the former President of attempting to sabotage Prof. Mills’ presidential ambitions by trying to replace him with Ato Ahwoi.

“Jerry Rawlings invited Ato Ahwoi to his Ridge residence and prevailed on him to contest the presidential primaries against Prof. Mills. Ato says he was astounded because Jerry knew his relationship with Prof. Mills and also knew the role that he had played in 1996 in convincing Prof. Mills to agree to become his running mate”, portions of the book read.

But in a statement , Rawlings explained that Prof. Mills had called him to South Africa, where he had gone to receive medical treatment, to indicate his desire to forego the presidential race owing to his medical state.

Rawlings described as bizarre, Kwamena Ahwoi’s lengthy diatribe about how he [Rawlings] coerced Prof. Ahwo’s brother [Ato Ahwo] to contest Mills ahead of the NDC’s primaries – leading to the breakdown of their healthy relationship.

According to Rawlings, Mr. Ahwoi instead forced Prof. Mills to contest the polls despite his ill health against his will.

“That, was when the mistrust began, and Mr. Kwamena Ahwoi was and is well-known to be one of the master-architects of that manipulative agenda that pushed a very unwell candidate Mills into the 2008 General Election,” he added.

Following the conversation, Rawlings said he informed and urged party members to “identify recognizable party members who could step in,” insisting that some known personalities in the party should position themselves for the role.

Rawlings, therefore, rejected claims that Ato Ahwoi was forced to contest Mills in the NDC’s primaries ahead of the 2008 general elections.

In the statement, the office of the former President said there was no “attempt to undermine, sabotage, betray or malign Professor Mills as the author shamelessly infers in his book. It should be stated on record, that President Rawlings took the responsible and pragmatic approach after he received that politically unnerving call from Professor Mills. He consulted the Party leadership to take strategic steps to fill the gap which by Professor Mills' account was imminent”.

“It is rather telling of him (Kwamena Ahwoi) to deny this well-known crisis merely in his bid to deride and denigrate the genuine efforts of former President Rawlings to arrest a crisis,” Rawlings clarified.