Tell Ghanaians The Wrongs Of The Past – Otumfuo Tells Mahama 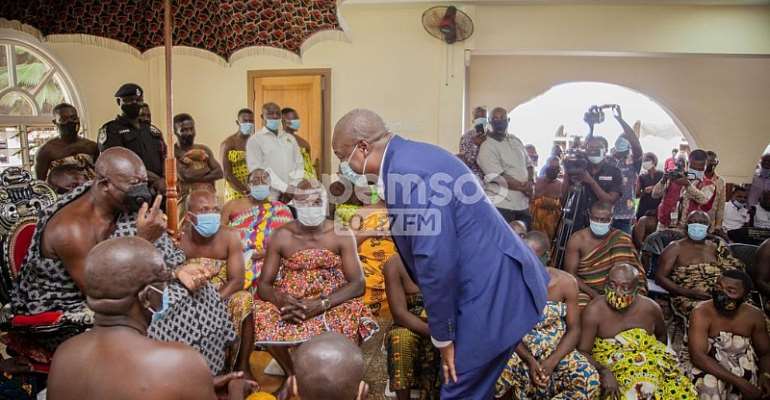 Asantehene Otumfuo Osei Tutu II, has told the NDC and former President John Mahama not to visit the Manhyia Palace only when they are in power.

He made the remarks when the NDC presidential candidate, Mahama and an NDC delegation paid him a courtesy call.

The delegation was at the Palace to introduce Prof. Jane Naana Opoku Agyemang, running mate to John Mahama for the 2020 elections.

He told the former President and the delegation about how they have abandoned the Palace since NDC was voted out of office in 2016.

Otumfuo Osei Tutu II minced no words in telling the former President and his delegation how their frequent visits to the Palace when they were in power ceased after they were voted out of office.

“Today I have seen all my grand children that I haven’t seen in a while,” the Asantehene said.

After the running mate was introduced, the Asantehene adviced the NDC flagbearer, former President Mahama to assess why he was voted out of office by Ghanaians and tell Ghanaians the lessons he has learnt.

“Tell Ghanaians the wrongs of the past and how you will correct those wrongs,” the Asantehene told the former President.

He also called for an issue-based campaign to enable Ghanaians make an inform decision come December.

Some MMDCEs will be approved in December because of controve...
24 minutes ago