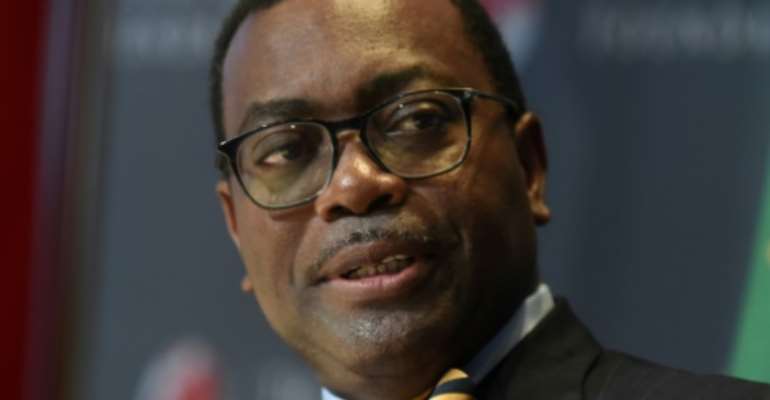 Adesina was embroiled in accusations over his management of the AfDB before independent investigators cleared him last month. By PIUS UTOMI EKPEI (AFP)

The head of the African Development Bank (AfDB), Akinwumi Adesina, appealed on Wednesday for a second term in office after a months-long storm over alleged corruption and poor governance that ended after he was cleared in an independent probe.

In a speech at the AfDB's annual meetings, Adesina formally requested a second term as president, declaring that he was "doing it with an acute sense of duty and commitment."

"I do it to serve Africa and our bank, in an unbiased way, to the best of the abilities that God has given me," he said, according to a statement issued in French.

Adesina's reappointment on Thursday at the helm of the 56-year-old bank is considered a formality as he is the sole candidate.

The future of the flamboyant former Nigerian farming minister clouded this year when whistleblowers alleged his watch had been tarred by graft, poor management, personal enrichment and favouritism.

He was cleared by the organisation's ethics committee, but the United States then intervened, demanding an independent investigation.

Adesina, 60, fought back angrily, backed by Nigeria, the biggest of the AfDB's shareholders.

Its report, issued last month, said Adesina had been properly investigated and that the panel "concurs with the (ethics) committee in respect of all the allegations" against him.

Adesina, the son of a farming family, became in 2015 the first Nigerian to head the bank, one of the world's five biggest multilateral lenders and an important but often unseen player in economic development.

He gained continent-wide recognition last October when the AfDB secured $115 billion (105 billion euros) in funding pledges, a move that doubled its capital and cemented its triple-A credit rating.

Criticism of his managerial style emerged after the bank was shaken by a string of departures when he took over.

The head of the AfDB's board, Niale Kaba, who is also the Ivory Coast's minister of planning and development, acknowledged in opening remarks on Wednesday that the bank had experienced a "management crisis" after the whistleblower report.

But, she said, the independent panel, through its investigation, had not only cleared Adesina "but above all strengthened the credibility of the institution's bodies, the guarantee of its stability and reputation with shareholders."

She paid tribute to Adesina's "leadership and the initiatives undertaken to develop Africa and help the continent to ease the impact" of the coronavirus pandemic.

The bank has moved swiftly in response, setting up a coronavirus funding mechanism in April of up to $10 billion.

The number of shareholders in the AfDB rose to 81, Adesina said, with the admission of Ireland. Fifty-four shareholders are African, while the others are from the Americas, Asia and Europe.

Latest Photo Reports
Catch up with all the political quotes from our politicians.
Advertise here
More Africa
ModernGhana Links
Working session of the Technical Committee for the selection of beneficiaries of the Young Graduates Internship Programme in ECOWAS institutions, 2021 edition
Niger speeds up efforts to build first hydroelectric dam
Soul-searching for Boks ahead of 'special' 100th All Blacks clash
Mandela to 'House of Pain': Five epic Springboks v All Blacks matches
'God Has a Dream': top seller for Tutu's 90th-birthday auction
The race to vaccinate: why Africa is struggling to get Covid jabs
Sahara camel race glory brings boy jockey big dreams for his future
Djibouti president, 73, returns home after hospitalisation rumours
In Niger, nomadic herders gather in shadow of jihadist threat
TOP STORIES