Are You Ready To Cast The First Stone? 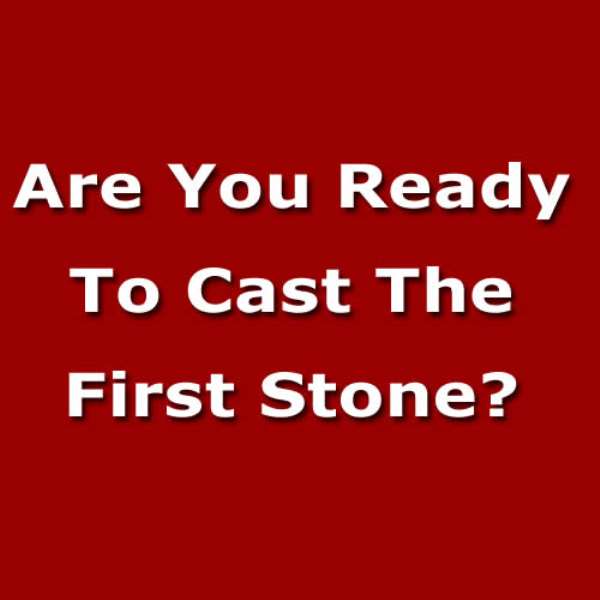 Picture the scene. Jesus appeared at the temple courts at dawn teaching the people who had gathered there to listen to him. Outside the temple were the teachers of the law and the Pharisees with a matter they considered so urgent and important that they had to interrupt what Jesus was doing. A woman had been caught in adultery, and they decided to turn the solemn, teaching occasion into a circus by bringing her to Jesus.

They made the woman stand before the group and asked Jesus for his opinion about what they should do since in the Law, Moses commanded them to stone such a woman to death. They wanted to trap Jesus with that question.

Jesus started to write on the ground with his finger, and when they kept questioning him, he responded that the person without sin should be the first to throw a stone at her. He continued writing on the ground. One by one they started leaving until no one was left, except Jesus and the woman. Jesus asked the woman whether any of her accusers had condemned her and she said no. Jesus then told her that he, too, did not condemn her and that she should go and not sin again.

This is an interesting and unique passage of Scripture found in John 8:1-11. Jesus spoke extensively and did a lot of things while he was physically present on earth, but it is probably only in this incident in the Bible that we are told he actually wrote something. Unfortunately, we do not know what he wrote on the ground.

Note that the people who brought the charge against the woman were not your ordinary angry mob on the street. No, those were the teachers of the law and the Pharisees. Those were people who knew and followed the Law of Moses and were very sure of their self-righteousness. Those were religious leaders whose main aim was to trap Jesus so that they could use his answer as evidence against him. There was no show of humility, and no love or compassion for a daughter of Abraham who had gone against the Law of Moses. However, if none of those self-appointed “religious police” was able to cast the first stone, would you be able to do so today given the same opportunity?

“Cast the first stone” is not an invitation to excuse or condone sin. Jesus was the only one there without sin and could have cast the first stone, but he did not. However, Jesus did not condone the sin. Jesus knew, as did his brother James years later, that “mercy triumphs over judgment!” (James 2:13b NIV). In telling the woman that he did not condemn her and that she should go and sin no more, Jesus was re-affirming his position stated in John 3:17 that he did not come to condemn the world, but that the world might be saved through him.

Similarly, followers of our Lord Jesus Christ would help advance the kingdom of heaven better if we spend more time and resources preaching and teaching salvation and little or no time or resources on condemning people. The love that made God give His only Son Jesus Christ as a living sacrifice for our sins should be our guiding principle. We should draw more people into the kingdom with messages and actions of reconciliation and salvation rather than away from it through condemnations.

We need to appreciate the urgency of the Christian mission to make disciples of all nations. As Jesus said, “the harvest is plentiful, but the workers are few” (Luke 10:2 NIV). That means the few workers need to work wisely and efficiently in order to reach out to many people with messages of love, forgiveness, and saving grace of Jesus. The time used to accuse or condemn others may be equally used to preach or teach salvation. Condemning people may make us feel good about our self-righteousness, but it may not necessarily translate into salvation. It probably may not score any points or earn rewards for us in heaven, either.

Of course, that does not mean that Christians should not say or do anything about what other Christians and other people say or do. We need to build each other up in fellowship of love and humility using Scripture, prayers, and other God-inspired means. That was why Paul told Timothy, a minister of the Gospel, that “all Scripture is God-breathed and is useful for teaching, rebuking, correcting, and training in righteousness” (2 Timothy 3:16); and charged him to “preach the Word. Be prepared in season and out of season; correct, rebuke, and encourage with great patience and careful instruction” (2 Timothy 4:2).

Note also how the devil may use even religious leaders to prevent, derail or delay the work of God in progress. Remember that Jesus had appeared at dawn teaching people at the temple courts when the teachers of the law and the Pharisees interrupted him with the woman’s accusation. Jesus had to stop and address the woman’s situation. Who knows how many of Jesus’ original listeners left the temple as a result of the interruption? Well, probably all of them, because in the end only Jesus and the woman remained. If any others remained, or among those who left, who knows how many minds were diverted from Jesus’ teachings to the woman’s situation due to loss of concentration?

It was a lost opportunity for all of the people around because the news about a woman caught in adultery was probably more exciting to them than the Good News. We should be on our guard against seemingly urgent but relatively unimportant matters which may interrupt our opportunities to witness to others, read the Bible, attend Church Service or fellowship, pray or help those in need.

“Cast the first stone” is a challenge to us to examine our own lives first, before we look at the other person. It is for us to remove the log from our own eyes before we can see clearly the speck in another person’s eyes. If the teachers of the law and the Pharisees were angry or disappointed that they did not stone the woman to death or trap Jesus, they missed a valuable opportunity. On the other hand, if what Jesus did or said caused them to think and reflect on their own sinfulness and the need to repent of their own sins, as all of us should, then the incident was a valuable learning opportunity. Are you ready to cast the first stone? Or, are you ready to drop your stone, show love to all, and point them to the forgiving and saving grace of Our Lord and Savior Jesus Christ?