Kumasi: Manhyia South Gets Another AstroTurf 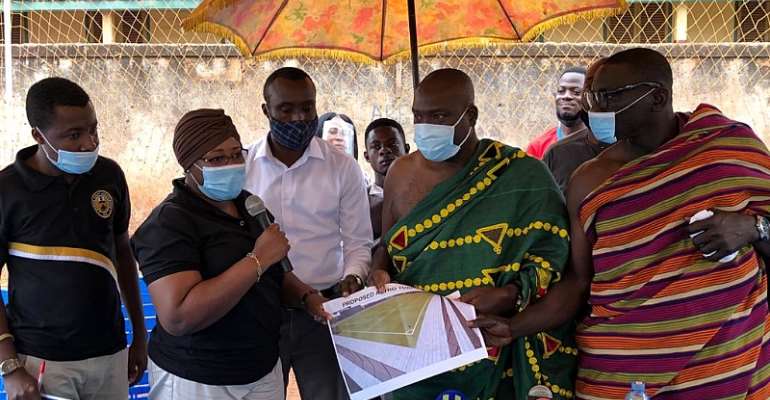 Construction works for an ultra-modern AstroTurf facility have started at the Konadu Yiadom M/A School in the Manhyia South Constituency in Kumasi.

The edifice is being sponsored by the Ghana National Petroleum Corporation (GNPC) Foundation, and it is geared towards improving sporting activities in the area.

The construction of the facility was made possible following an appeal made by the Asantehene’s Lands Secretariat, headed by Otumfuo Apagyahene, Nana Owusu Afriyie IV.

The new AstroTurf project, which is to be completed in six months’ time, will increase to three, the number of AstroTurf facilities in the Manhyia South Constituency.

The MP for Manhyia South constituency, Dr Matthew Opoku Prempeh, known popularly as Napo, has completed a brand new AstroTurf project at the famous Abbey’s Park in the constituency.

Following the vision and hard work of Napo, another AstroTurf project is currently being constructed at Dichemso, also in the constituency, to boost sporting activities.

The Head of Environment & Social Amenities at GNPC Foundation, Loubaabat Habib, and other officials of GNPC Foundation graced a short event for the Konadu Yiadom M/A AstroTurf project to start on Thursday.

She said a full standard football pitch will be constructed in six months’ time, and so she urged the constituents to offer maximum support to the contractor.

According to her, the GNPC Foundation received a letter from the Asantehene’s Land Secretariat to develop the grassless pitch into a modern park—and they obliged.

He also stated that a full standard football pitch with other modern amenities will be constructed at the place, and he called for total support for the project.

Eddie Dankwa of BLAG Ghana Limited, the company constructing the facility, said the project will boast of floodlights, an artificial pitch and other modern amenities.

He indicated that a modern FIFA standard facility will be delivered to help beautify the place and also promote sporting activities.

Nana Opoku Ware, Otumfuo Tromoo Akwasihene, who was also present at the function, appealed to residents of the area to give the contractor their support to complete the project on time.