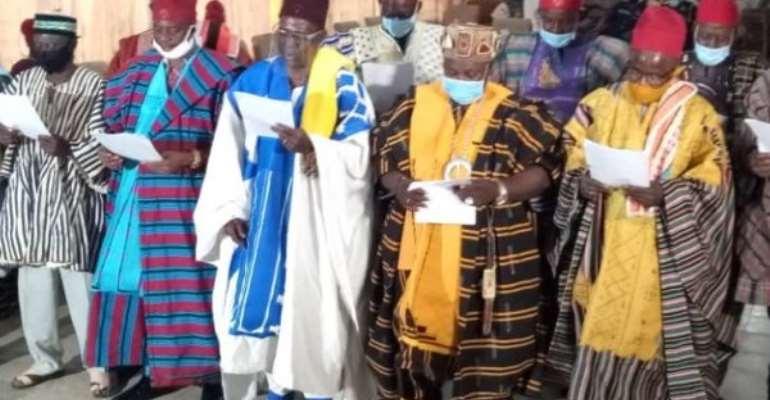 The Upper East Regional House of Chiefs has sworn in one Paramount Chief and 12 Divisional Chiefs with a call on them to sacrifice for the wellbeing of their people.

The ceremony also conferred official status on the Paramountcy of Zuarungu Traditional Area after over 60 years of struggle.

Naba Biliya Maltinga Afeghera III, a Police Officer, was sworn in as the Paramount Chief for the Traditional Area which has 13 sub-chiefs.

The other 12 divisional chiefs are from the Kusaug and Sandema Traditional Areas.

Justice Jacob Boom, the Supervising High Court Judge, who swore in the chiefs, urged the new members of the House to abide by the Chieftaincy and the Legislative Instrument in the discharge of their mandate.

He said the new members needed to cultivate the spirit of sacrifice and diligence to better serve their people.

Naba Awuni III also asked the chiefs to remain neutral when politicians visit their palaces to solicit support for the 2020 general elections.

The President admonished the new chiefs to always put the wellbeing of their people first and to deal with cases in a fair and balanced manner to promote sustainable peace.

Naba Afeghera III, on behalf of the other 12 Divisional Chiefs, pledged to abide by the regulations governing the chieftaincy title and the house of chiefs.

The new members would also work to improve the lives of the people in their communities.

Naba Afeghera III said, as a security expert, he would bring his expertise to bear on the work of the security agencies to fight crime and ensure safety in the region.

The Zuarungu Paramountcy becomes the 18th paramountcy of the Upper East Region.

The occasion, characterized by cultural performances, was graced by Ms Nadia Adongo Musah, the Deputy Director for the Diaspora Affairs at the Office of the President, Dr Dominic Akuritinga Ayine, Member of Parliament for Bolgatanga East, and native of Zuarungu, Mr Isaac Adongo, MP for Bolgatanga Central as well as Reverend Emmanuel Abugre Abole, the District Chief of Bolgatanga East.