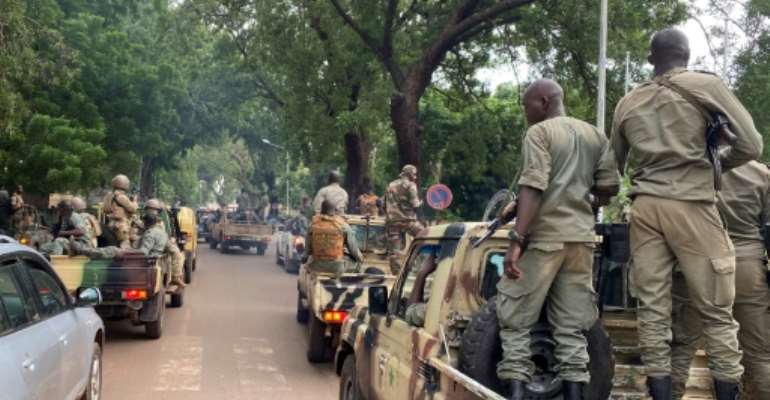 A military junta took power in Mali on August 18. By MALIK KONATE (AFP/File)

The West African bloc ECOWAS will send envoys to Mali on Saturday, the new junta said, after it gave the UN access to the ousted president and released two other leaders held in a dramatic coup.

Diplomatic momentum built on Friday, the third day of the troubled state's latest crisis, amid international pressure on Mali's new military leaders and preparations for celebratory rallies in the capital Bamako.

The delegation to Bamako will be led by former Nigerian president Goodluck Jonathan, an ECOWAS source said Friday, describing the trip as aiming "to help the search for solutions".

Timeline of the main developments in Mali's political crisis. By Gal ROMA (AFP)

He will be flanked by the president of the ECOWAS Commission, Jean-Claude Kassi Brou, and Niger's foreign minister, Kalla Ankourao.

A junta official told AFP that the envoys would be received "with pleasure... it is important to talk to our brothers."

ECOWAS -- the 15-nation Economic Community of West African States -- on Thursday had announced it would dispatch a high-level delegation "to ensure the immediate return of constitutional order".

Rebel soldiers seized President Ibrahim Boubacar Keita and other leaders after staging a mutiny on Tuesday at Kati, a military base about 15 kilometres (nine miles) from Bamako.

ECOWAS on Thursday demanded Keita be restored as president and bluntly warned the junta that they bore "responsibility for the safety and security" of the detainees.

The UN's peacekeeping mission in Mali announced that a human-rights team had gained access to the ousted president and other detainees late Thursday.

Keita was forced out after mounting protests. By Ludovic MARIN (POOL/AFP/File)

Keita and Prime Minister Boubou Cisse are being held in a villa in Kati and are without a television, radio or phone, while the others are in a training centre, where they are sleeping on mattresses and have a TV, according to witnesses to the visit.

The 75-year-old ousted president "looked tired but relaxed," they said, describing his conditions as "acceptable."

Those detained, according to various sources, include Defence Minister Ibrahima Dahirou Dembele, Security Minister M'Bemba Moussa Keita, the president of the National Assembly, Moussa Timbine, as well as the heads of the army and air force.

Their fate has been a focal point of international concern.

The African Union, European Union, the United States and UN Security Council have angrily condemned the coup and demanded the release of the detainees.

Kenyan President Uhuru Kenyatta on Friday urged a "speedy, peaceful and democratic" resolution to the crisis while DR Congo President Felix Tshisekedi described the coup as "dangerous for democracy in Africa."

The coup -- the second in eight years -- deals a body blow to a country struggling with a jihadist insurgency, moribund economy and deep public resentment over its government.

The coup leaders, pictured on state television after announcing they had taken power. By - (ORTM/AFP)

The junta has named their organisation the National Committee for the Salvation of the People, under the leadership of a 37-year-old colonel named Assimi Goita, who commanded Mali's special forces battalion.

Its spokesman, Ismael Wague, said on Thursday that "a transitional council, with a transitional president who is going to be either military or civilian" would be appointed.

The transition "will be the shortest possible," he told France 24 television.

Keita won election in a landslide in 2013, putting himself forward as a unifying figure in a fractured country, and was re-elected in 2018 for another five-year term.

But he failed to make headway against a jihadist revolt that has left swathes of the country in the hand of armed Islamists and ignited ethnic violence in the country's volatile centre.

Thousands of people have died and hundreds of thousands have fled their their homes.

That devastation has also compounded damage to an already fragile economy in a country with large numbers of unemployed young people.

Anger swelled after the disputed outcome of legislative elections in April, creating an anti-Keita protest coalition, the June 5 Movement, which scheduled rallies on Friday to "celebrate the victory of the Malian people."