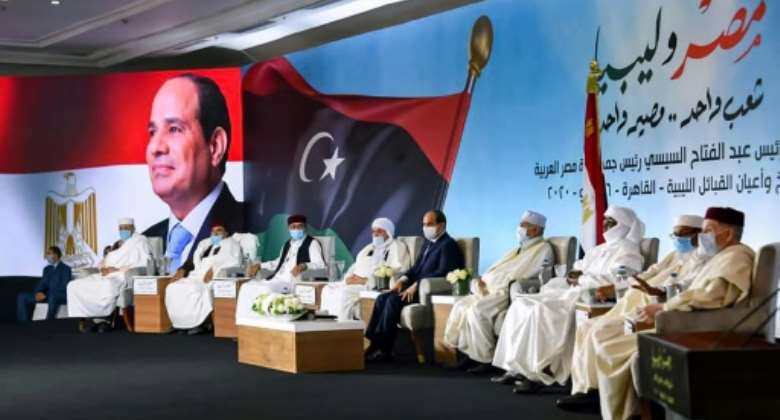 As Egypt flexes its muscle with threats to intervene in Libya's civil war, its President Abdel Fattah al-Sisi has sought to join forces with some of the neighbouring country's powerful tribes.

Cairo hopes the alliances would boost its legitimacy if it were to wade into the battlefield against forces backed by regional rival Turkey, and give it a local partner aside from the volatile strongman Khalifa Haftar, analysts say.

Last month, Sisi hosted Libya's Supreme Tribal Council, its sheikhs and elders dressed in white turbans and robes, at a conference in a Cairo hotel organised by Egyptian intelligence agencies.

Supporters of Libyan military strongman Khalifa Haftar take part in a gathering in the eastern Libyan port city of Benghazi on July 5 to protest against Turkish intervention on the side of the GNA based in Tripoli. By Abdullah DOMA (AFP/File)

For many of Libya's tribal leaders, Egypt offers a "lifeline" of support, said Abdelsalam Bohraqa al-Jarrari, a tribal elder from Tarhuna, south of the capital Tripoli.

"We want a complete military intervention -- air and ground support," he told AFP after meeting with Sisi, claiming that preparation had already begun along the Libyan-Egyptian border.

"We want new and advanced weaponry," he said.

Libya's patchwork of tribes -- including the Warfalla, Tuareg, Berber and other ethnicities -- command powerful loyalty and have in the past fought against Ottoman and European colonisers.

Some of them support the UN-recognised and Turkish-backed Government of National Accord (GNA), based in Tripoli in the west, which made a series of battlefield gains against Haftar earlier this year.

But many powerful tribes back Haftar, who is based in the eastern city of Benghazi and enjoys the support of Egypt as well as the UAE, Russia and other powers.

Traditional tribal leaders are seen as having greater influence in the Haftar-controlled, rural east than the more densely populated and urban west of Libya.

Haftar had spent 14 months trying to seize Tripoli before his forces suffered a string of defeats in early summer -- among them tribal fighters proud of their battlefield prowess.

"We have men who can eat rocks and spit them out," said Arafallah Daynoum Hurra, of Libya's Al-Barasa tribe in the eastern Al-Bayda region.

But, he explained, "we're in an uneven battle and that's why we retreated".

The frontline is now halfway between the capital and Haftar's stronghold Benghazi, just west of the central Mediterranean coastal city of Sirte.

Sirte is the strategic gateway to Libya's main oil fields and export terminals, and to the key Al-Jufra airbase to the south.

It is also a symbolic site as the hometown of former dictator Moamer Kadhafi, whose 2011 overthrow and killing in a NATO-backed uprising threw the country into chaos.

Libyan experts search for human remains on June 23 in an area southeast of Tripoli seized by the unity government from forces loyal to eastern strongman Khalifa Haftar. By Mahmud TURKIA (AFP/File)

For now, fighting has stalled in what German Foreign Minister Heiko Maas this week called a "deceptive calm", with arms and mercenaries still flooding into the county.

Western powers, fearing that a GNA attack on Sirte would raise the prospect of direct clashes between regional heavyweights Turkey and Egypt, have called for renewed peace efforts.

Sisi has vowed not to let GNA forces take Sirte -- although Cairo has since also stressed it is open to peace initiatives through dialogue.

Military engineers of the UN-recognised Libyan Government of National Accord (GNA) detonate mines and explosive devices uncovered from areas south of the capital Tripoli on July 22. By Mahmud TURKIA (AFP/File)

"The Egyptian army has been given the green light from us ... to strike immediately if the (GNA) militias lift a finger in Sirte," he told AFP in Cairo.

"Sisi told us when we met that Egypt will give us air and ground support if the Turks cross the red line of Sirte," said Fandi.

"As tribes we are giving legitimacy to Egyptian troops to protect... Libya's national security," which was in line with Egypt's interests, he said.

Jarrari, the tribal elder from Tarhuna, said he sees Egyptian support as the only way to end a grinding civil war centred on some of Africa's richest oil reserves.

It aims to counter and delegitimise Turkey's presence in Libya while finding local allies aside from Haftar, he said.

"Cairo wants to diversify its risk away from excessive dependence on the 77-year-old Haftar, whom the Egyptians find too whimsical and hard to manage," Harchaoui added.

"That is why the Egyptians now wish to put in place an array of Libyan figures ... more dependable, more malleable and more stable from an Egyptian perspective."