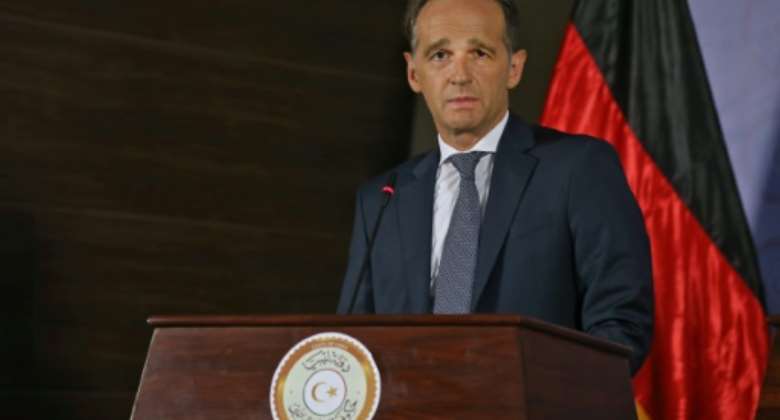 Outside powers are "continuing to massively arm the country," Maas, whose government has tried to broker peace in Libya, said during a surprise visit to the oil-rich North African country.

"In Libya at the moment we are observing a deceptive calm," he said in Tripoli, seat of the UN-recognised Government of National Accord (GNA).

Libya has been in chaos since a Western-backed uprising toppled Kadhafi in 2011, and has become a major departure point for desperate migrants trying to reach Europe with the help of traffickers.

Fighters loyal to the UN-recognised Libyan Government of National Accord on July 20 secure the area of Abu Qurain, half-way between Tripoli and Libya's second city Benghazi, against forces loyal to Khalifa Haftar, who is based in eastern Benghazi. By Mahmud TURKIA (AFP/File)

After 14 months of fierce fighting, forces loyal to the GNA expelled Haftar's troops from much of western Libya and pushed them back east to Sirte, a gateway town to Libya's oil fields.

While the GNA has been boosted by Turkish and Qatari support, Haftar has had the backing of the United Arab Emirates, Egypt, Saudi Arabia and Russia.

Now, said Maas, "both sides and their international allies are continuing to massively arm the country and holding firm to their preconditions for a ceasefire".

A July 9 picture shows a residential building in the south of Tripoli damaged during the 14 months of fighting between the GNA and forces loyal to Khalifa Haftar. By Mahmud TURKIA (AFP/File)

Maas urged "ways out of this very dangerous situation" and backed a UN proposal to establish a demilitarised zone around Sirte, located 450 kilometres (280 miles) east of Tripoli.

According to Turkish media reports, Turkish Defence Minister Hulusi Akar was also in Tripoli on Monday.

Germany's top diplomat was next due to also visit the United Arab Emirates, which last week agreed to normalise diplomatic relations with Israel.

Maas said the UAE had "shown that it has the ability to make an important contribution to peace in the region" and added that now he also hoped "to see encouraging signs from Abu Dhabi on the issue of Libya".

"The United Arab Emirates is in a position to influence General Haftar, and we expect it to do so, in the spirit of the Berlin Process," he said.

"Only those who participate in a political process will be part of Libya's future," he added.

Vehicles of the "Tripoli Brigade", a militia loyal to the GNA, parade on July 10 through Martyrs' Square at the centre of the capital Tripoli. By Mahmud TURKIA (AFP/File)

Maas said that in Libya he also wanted to discuss the fate of migrants stuck in detention centres, where human rights groups have reported widespread abuses and mistreatment.

"For a long time we have been calling for the closure of the detention centres and the establishment of alternatives in urban regions," he said, calling for "effective measures to finally combat human trafficking networks".