Naa Koryoo makes an emotional appeal to Ghanaian Youth not to gamble with their votes. 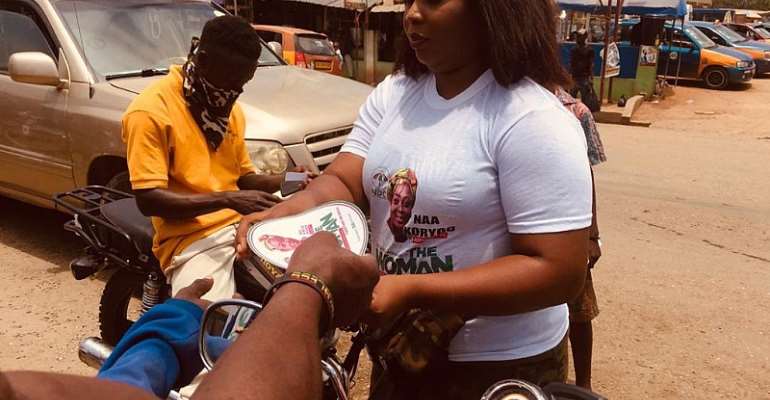 Phyllis Naa Koryoo Okunor, often referred to as the “The Woman” and NDC Parliamentary candidate for Senya Awutu East (Kasoa), has made an emotional appeal to her constituents and the Ghanaian youth in general not to listen to the lies of the NPP and gamble with their votes. She made the appeal after a day of hectic campaigning in Kasoa.

Naa Koryoo, a Human Rights lawyer and native of Kasoa, is seen as one of the young brightest politicians who honed their skills as student leaders and activists of National Union of Ghana Students (NUGS) and Ghana Law School. Naa Koryoo, born and raised in the Kasoa (and is on first name terms with the citizens of Senya Awutu East Constituency), won her primaries beating 6 men to stand as the NDC Parliamentary candidate. Majority of those who voted for Naa Koryoo in the primaries are the college youth, market women and the suburban folks.

Addressing over 55,000 strong rally at Kasoa, Naa Koryoo called on her generation (The Millennials) and the current generation, (often called Generation Z) the Gen Z, who have registered to vote for the first time in their lives to rise up and vote in their numbers to map out their destiny by rejecting vote buying and rather vote on issues that affect their lives now and the future. Naa Koryoo told the crowd that, “it was during our generation, the millennials, that our country transited to parliamentary democracy after almost 3 decades of military rule, and your generation, the Gen Z, grow up with social media, smart phones, also Ghana discovered huge volume of oil and gas, large discovery of Gold in almost all the regions of our country, yet just under three and half years your future is being mortgaged by Nana Akufo Addo/Bawumia NPP mismanagement, mis-rule and brutality, and sadly the Coronavirus Pandemic has exposed this bad governance and looting of state resources by this family and friends NPP government”.

Naa Koryoo speaking in the local language, Twi and Ga, rhetorically ask the crowd if they know and or are aware, of how the proceeds from the cocoa, the oil and gas, the Gold and other resources are used and has the NPP government under candidate Nana Akufo Addo and his side vice-presidential candidate Bawumia ever rendered account of Ghana’s money, including the over $20 billion USD they have borrowed since January 2017 to the people of Ghana? Naa Koryoo said the moment NPP were voted into office in 2016 and assumed power at the Flagstaff House, they turned the country into ANIMAL FARM and has become monsters, where they see the youth and the poor as inferior. Naa Koryoo stated that the youth of Ghana would never trust the NPP government and Akufo Addo again and said the youth of Ghana must never surrender their votes to those who are promising the “MILK AND HONEY NOW” but soon after the elections are over, these same NPP people would turn their back on them and instead use the security forces to brutalised them. Naa Koryoo cited Ayawaso West Wogon constituency by election as an example of sheer brutality and the recent firing of gunshots at a polling station close to her house by Mavis Hawa Koomson, the sitting MP who is old enough to be Naa Koryoo’s mother, just because her government is in power and she being a minister is untouchable. Naa Koryoo told the rally this is the state of the country we live in, where lawlessness by the ruling party is seen as normal.

Directly addressing those who turned 18 years old, the Gen Z and had registered this summer for voters card, stated that “with global warming ravaging our planet and its impact directing affecting Africa, including our country Ghana, retrenchment of nations from migration from Africa, diminishing of resources, and population growth in sub-Saharan Africa projected to reach 2 billion in just over two decades from now, this is the time and moment to actively engage in politics and make your voice be heard, ask those managing our country and resources to account for their stewardship, account for how they disbursed the public purse. “We elected them to run the affairs of our country and not to be LORD over us, by firing gunshots at voters’ registration centres to frighten and intimidate you the citizens, with thugs, instead of showing us what they have done since they were elected in 2016.

Naa said “never in our country’s history have we been confronted with such a pandemic, the Covid19, worse than Ebola, because we are fighting an unseen virus that is wreaking havoc across our country and the world”. She said the human tragedy and financial costs of this pandemic in Ghana would be felt for years to come and it is incumbent on the NPP to account for all the monies spent during this Covid19 period. Naa Koryoo said during the mini budget the Finance Minister, Ken Ofori Atta, a cousin of President Akufo Addo said the NPP government spend 54 million GHS to feed 450,000 Ghanaians in 3 weeks, then later when the NDC accused him of “cooking the books” he quickly made another statement to change the expenditure to 12 million GHS, a difference of 42 million GHS, and said when the NDC states over after the elections NPP would account for every cedi and dollar they have spent.

Naa Koryoo told the rally, especially the youth, that their future lies here at home as the Covid19 has vividly shown and thus the very reason she put out a policy proposal of setting up vocational training and education in all the 10 Technical Universities across the country to train the youth with requisite skills that would enable them contribute their quota towards national development. Naa Koryoo told the jubilant crowd that President John Mahama and Vice-Presidential candidate Naana Jane have acknowledge and agreed to her policy proposal, which would be included in the youth reforms that the incoming NDC government would roll out from the very first year of NDC government.

Naa Koryoo, an anti-corruption campaigner and Human Rights lawyer, said accountability and anti-corruption would be the guiding principle of the incoming Mahama - Naana Jane administration.

Naa Koryoo said under the incoming NDC administration no one would be left behind, including the vulnerable groups such as the disabled, those with mental illness, older people, the youth including those due to lack of opportunities have to hawk for a living or work as head porters (Kaya girls), market women who could not either go to school or continue with their education due to poverty and single mothers. Naa Koryoo said our country is so divided that over 80% of the citizens do not have a stake in it, but rather live from hand to mouth. Naa Koryoo, who was filled with emotion at this point, told the large crowd in a cracking voice that, at this time and age, in Osagyefo Dr Kwame Nkrumah’s Ghana, many of our fellow citizens go to bed with no food. Naa Koryoo, who has been a community activist in Kasoa since her student days supported her assertion with facts. Many in the crowd alluded to what Naa Koryoo said about hunger in the country.

Naa Koryoo said she knows her constituents and the citizens of Ghana would vote in big numbers for John Mahama and Naana Jane come December 7, because this journey the NDC and the youth of Ghana have been on has been on making life better for all Ghanaians irrespective of status or how rich one is, but about the very survival of our country. Naa Koryoo said our country faces huge challenges, in the face of brutality by political thugs, in the face of massive corruption, in the face of worst economic crisis which has been exacerbated by the Covid19 pandemic, and in some cases unprecedented obstruction and prevention of our citizens to register to vote because the NPP deemed them as “foreigners” in their own land of birth, in the land that was bequeathed to them by our fore fathers, the land that Sergeant Adjetey, Corporal Attipoe and Corporal Odartey Lamptey laid down their lives for and concluded that never again shall we allow a small group of people to determine who is and is not a Ghanaian. Just before Honourable Naa Koryoo brought her speech to an end, the crowd spontaneously began to sing Ghana’s national anthem in Twi, “HEN ARA ASAASE NI”, Naa Koryoo, who couldn’t hold her tears joined the crowd in singing the anthem.