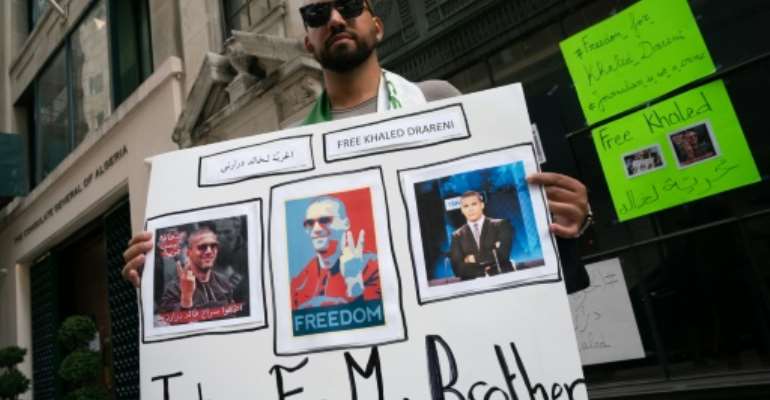 The brother of jailed Algerian journalist Khaled Drareni, who was sentenced Monday to three years in prison, called Saturday for his brother's "immediate liberation."

Chekib Drareni, who lives in New York, told an AFP journalist outside the Algerian consulate there that his brother had been jailed for merely "doing his job."

He was joined by a small group of protesters holding posters saying "Journalism is not a crime" and "Freedom for Khaled."

"We are extremely disappointed that Khaled was arrested, imprisoned and treated in this fashion," his brother said. "Neither Khaled nor other Algerian journalists deserve such treatment."

Khaled Drareni, 40, is the editor of the Casbah Tribune news site and a correspondent for French-language channel TV5 Monde.

Jailed since March 29, he was sentenced by a court in Algiers for "inciting an unarmed gathering" and "endangering national unity" after covering anti-government protests by the Hirak movement.

Since then he has become a symbol of the struggle for press freedom in the North African nation.

Rights groups and journalism associations have sharply assailed the sentence.

Watchdog group Reporters Without Borders, for which Drareni also works, has condemned his sentence as "arbitrary, absurd and violent."

A growing crackdown on Algeria's press has drawn international condemnation, with the European Union on Friday expressing its concern.

"We have the support of several countries, and we also hope the Algerian justice system will do something," Chekib Drareni said. "We won't give up."

He complained that authorities have not allowed the family to visit his brother, who has been granted only two brief phone conversations with their mother.

The Hirak movement last year forced the removal of longtime Algerian ruler Abdelaziz Bouteflika amid enormous street protests against his decision to seek a fifth term.

Two other people accused along with Drareni, Hirak protesters Samir Benlarbi and Slimane Hamitouche, were each sentenced Monday to two years' jail time.