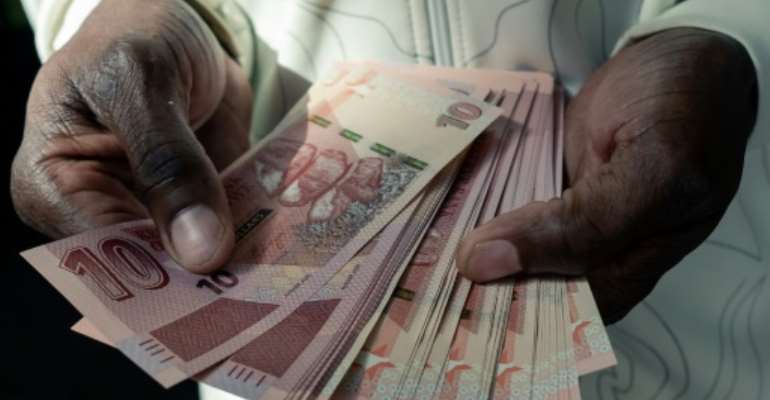 Zimbabwe has been grappling with more than a decade of hyperinflation. By Jekesai NJIKIZANA (AFP)

Zimbabwe's annual inflation rate soared to almost 840 percent in July, the statistics agency said Saturday, adding to the country's desperate economic woes even as the government refused to acknowledge a growing sense of crisis.

The southern African nation has been grappling with more than a decade of hyperinflation triggered by economic mismanagement under former president Robert Mugabe, who was ousted by a military coup in 2017.

Many Zimbabweans have seen their savings evaporate and still struggle to afford basic commodities such as sugar and the staple cornmeal, with corruption and poverty rife.

The figures were published shortly after a government statement was issued saying that President Emmerson Mnangagwa had implemented policies "that result in a robust economy" and had kept the country "commendably stable", denying any crisis.

The July inflation rate of 837.53 percent, which was announced by the Zimbabwe National Statistics Agency on Twitter, compares with 737.3 percent in June.

The government statement -- published by the state-owned Herald newspaper -- was a response to a letter by Zimbabwe's Catholic Bishops on Friday that deplored a recent crackdown on dissent by Mnangagwa's administration and a deepening crisis in the country.

Last month, the authorities banned protests planned by an opposition politician and deployed the army and riot police in huge numbers to quell them.

Opposition figure Jacob Ngarivhume, who had called for the July 31 protests against alleged state corruption and worsening economic troubles, was arrested 12 days ahead of the strike.

Journalist and documentary filmmaker Hopewell Chin'ono was also detained. They both remain in custody after being denied bail.

More than a dozen protesters, including award-winning author Tsitsi Dangarembga, were arrested on July 31 and later freed on bail. All have been charged with inciting public violence.

The bishops described the clampdown as "unprecedented" and weighed in on the ongoing crisis, which the government has repeatedly denied.

They said the "struggle in Zimbabwe" resulted "in a multi-layered crisis of the convergence of economic collapse, deepening poverty, food insecurity, corruption and human rights abuses".

Government spokesman Nick Mangwana accused the bishops of joining the "bandwagon of individuals and entities" seeking to invent crises for political gains.

"Government reiterates that Zimbabwe, like most countries in the world is currently grappling with challenges attendant to illegal sanctions, drought and the coronavirus pandemic," Mangwana said, quoted by The Herald. "There is no 'crisis', political or otherwise."

The sanctions were issued to commemorate the two-year anniversary of a violent army-led suppression of protests over alleged election fraud, in which at least six people were killed.