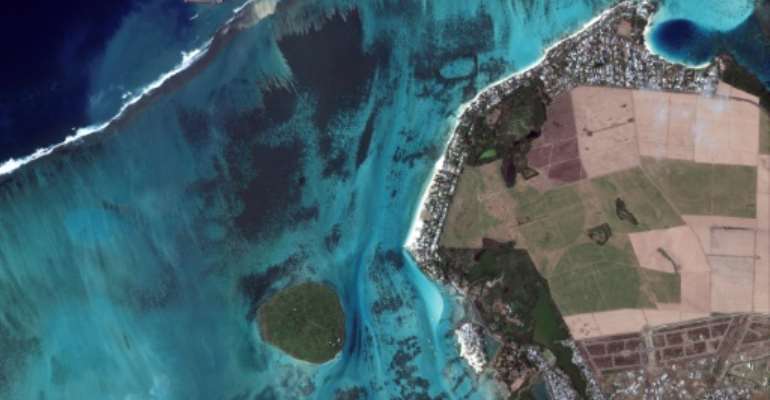 A fresh streak of oil spilled Friday from a bulk carrier stranded on a reef in pristine waters off Mauritius which is already reeling from the ecological disaster, as demands mounted for answers as to why the vessel had come so close to shore.

The Japanese-owned MV Wakashio ran aground on a coral reef on July 25 and a week later began leaking over 1,000 tonnes of oil into a protected marine park boasting mangrove forests and endangered species.

France and Japan have responded to the Indian Ocean island's call for help, along with thousands of ordinary Mauritians who volunteered day and night to clean sludge from the picturesque tropical coastline.

Salvage crews raced against the clock, with the boat threatening to split in two, to pump almost 3,000 tonnes of remaining fuel off the boat.

While the boat's reservoirs were successfully emptied on Wednesday, preventing further massive damage, some of the remaining 100 tonnes of oil stored elsewhere on the boat began to leak on Friday.

"Since this morning the water has again turned black around the Wakashio," said fisherman Alain Francois.

"Authorities tell us it is the waves entering the boat which is removing the fuel in the hold."

A source working on the salvage operation, speaking on condition of anonymity, said the oil sludge came from the machine room where it was impossible to pump the oil out.

"We can't penetrate this part of the vessel. It is too dangerous. There is a risk of asphyxiation," the source said.

However he said the fresh oil would be captured by floating barriers stuffed with straw and stitched together by Mauritians who have rallied to aid the clean-up operation.

The spill is an ecological and economic disaster for Mauritius, which relies heavily on tourism.

The government has come under fire for doing too little in the week after the ship ran aground, while experts from the Japanese Nagashiki shipping company, which owns the Wakashio, took three weeks to arrive.

Greenpeace wrote a scathing letter to the ship's owners, saying: "many unanswered questions remain. Why was your vessel sailing so dangerously close to the reef? Why have you done so little since the ship ran aground? What will you do to reduce the damage to the environment, and the pain and suffering of those whose livelihoods depend on it?"

The ship's owner has meanwhile pledged to "sincerely" respond to requests for compensation over damage to the marine environment.

"We are deeply conscious of our responsibility as a party directly involved in the case," said Kiyoaki Nagashiki, president of Nagashiki Shipping.

"Regarding compensation, we plan to deal with the issue sincerely based on applicable laws," the head of the Okayama-based company said in a statement.

"We will continue to do our utmost to collect the leaked oil and to minimise the impact of the environmental pollution," he added.

In an interview with AFP on Thursday Prime Minister Pravind Jugnauth said a probe into events surrounding the disaster was still ongoing.

"The investigation will be able to determine the causes of this accident, the reasons why the boat came so close to our shores and ran aground," Jugnauth said.

"And of course, a general mobilisation at all levels will continue cleaning up and making sure that the oil can be removed from the sea."