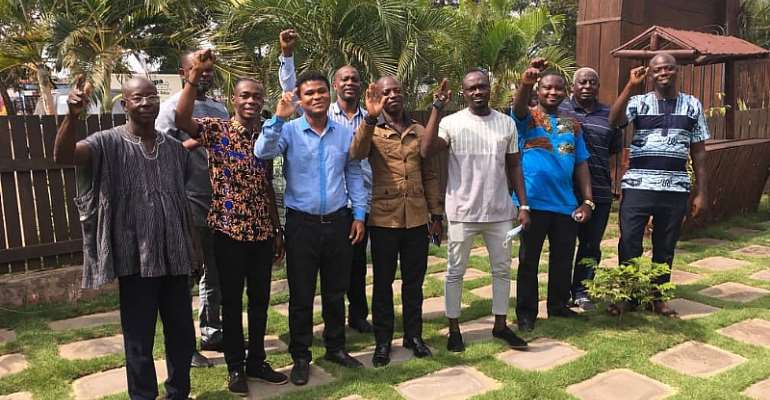 2012 & 2016 Independent Presidential Candidate and a founding member of Ghana First Platform, Mr. Jacob Osei Yeboah has commissioned, the Volta and Oti Regional Executives of United 1 Ghana (U1G) and United Movement of Change (UMC) in Accra, under the umbrella of Ghana First Platform (GFP) for election 2020.

Speaking at the occasion , Mr. Yeboah tasked the newly commissioned executives to work in the interest of Ghana and also engage in healthy politics devoid of insults, so at the end they will work to ensure that, an Independent President is elected to lead this country.
Mr. Yeboah further said Ghana First Platform is not about him, but is about patriotism and commitment to the plight of the people and that should he, be elected to lead the GFP he will together with the other aspirants work to ensure victory for all patriots. He added should another candidate be elected, he will encourage others to join him so they can fully support the winning candidate to free Ghana from partisan bondage.

He charged U1G and UMC that their counterparts National Interest Movement (NIM) also a member of GFP with reform agenda are prosecuting the same agenda for elections 2020.

Mr. JOY charged the team to let Ghanaians know that *three sleepless problems confronting Ghanaians that needs Tsunami Change* is not more about NPP and NDC as parties but mostly;
1. Presidents Nana Addo and Fmr. President Mahama wanting re-election in 2020 is a taboo,
2. Corruption and Filtiness destroying moral fiber and the environment in Ghana, presided over both is a threat to national security
3. 1992 Constitution of the 4th Republic.

In response, the Volta and Oti Regional chief coordinator Mr. Worlanyo Anani Amegashie expressed gratitude to Mr. Yeboah and the entire executives of U1G and UMC to be part of the credible alternative agenda of Ghana First Platform. He further noted that, he and the newly commissioned team will work hard to bring an Independent Candidate to power come 2020 elections.
Meanwhile other regional executives will soon be commissioned in the coming days.

However in attendance were, some executives of some branches of GFP which were JOY2020, United One Ghana and United Movement For Change.