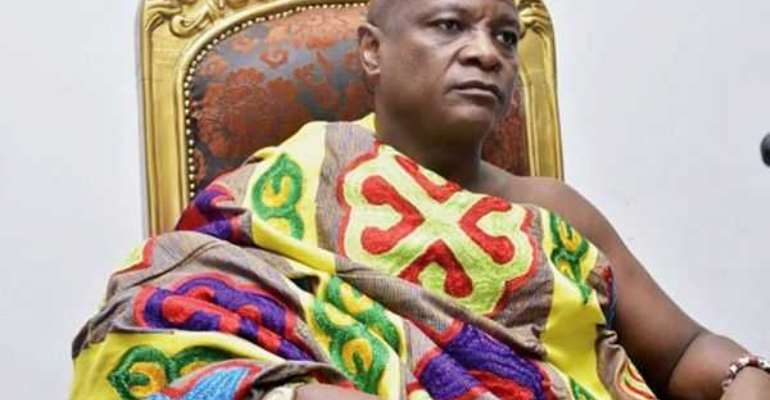 The Asogli State Council in the Volta Region has disassociated itself from, and strongly rubbished two separate media publications that sought to drag the integrity of the Council and its President, Togbe Afede XIV into mud.

It also sought to create tension between the Chiefs in Volta Region and the opposition NDC for no obvious reason.

The said concocted publications falsely accused the chiefs in Volta region of blaming the opposition NDC for the low level of development in the region and vowed not to vote for the NDC again bearing the images of Togbe Afede XIV.

However, a statement issued and signed by the Secretary to Asogli State Council, Stephen Tetteh denied any knowledge of the Council and Togbe Afede XIV who is also the President of the National House of Chiefs.

The statement described the publications as "fake" and urged public to disregard them with utmost contempt.

Read the Full Statement Below

Re: “Volta Chiefs Blast Opposition NDC” and “Announcement to all Voltarians”

Within the spate of one week, two stories, in which some mischievous characters tried to exploit the name of Togbe Afede XIV, President of Asogli State Council, have gone viral. We wish to inform the general public that these publications are fake.

In the first publication, titled, “Volta Chiefs Blast Opposition NDC”, with Togbe’s picture at the top, the “chiefs and people of the Volta Region” were reported to have, among other things, “accused or blamed the opposition National Democratic Congress (NDC) for poor or low level of development in the region over the years”.

It further reported, and we quote, “We the Chiefs and the people of the region are saying that, we are tired of voting for NDC. The propaganda in the NDC is too much. We shall change our way of voting come December 7th 2020”.

In the second publication, titled, “Announcement to all Voltarians from the Asogli State, his Royal highness Togbe Afede XIV”, and purported to have been issued and signed by Togbe, it was reported, among other things, that, “We have, since 1992, supported the NDC because its (sic) was founded by one of our own, his excellency Flt Lt J J Rawlings because he is our blood, our brother, father and a renowned personality from our land”.

It further stated that, “Because of him, we have supported the NDC from 1992 through thick and thin and still continue to support them even though, this loyality (sic) has not been replicated in terms of infrastructural projects, jobs and investments to our region”.

But for the anxiety they have created among a few people, we would have treated these worthless and poorly written publications with contempt. So, for the avoidance of doubt, we wish to emphasize that Togbe has nothing to do with the two publications, which are obviously the work of shameless, mischievous and evil-minded people.