Calls for accountability intensify in Lebanon despite government resignation 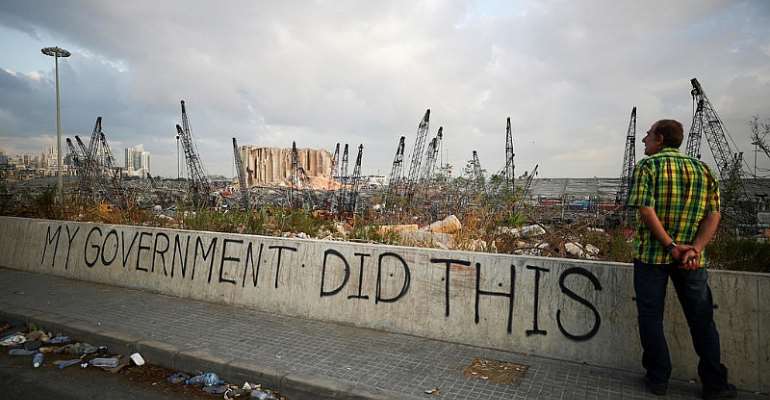 Protesters in Lebanon have vowed to continue demonstrating until the country's corrupt ruling class is removed. Despite the government's resignation on Monday, many Lebanese say it will do little to address the tragedy of last week's Beirut explosion.

Fresh protests were planned on Tuesday near the port, where highly explosive material stored for years detonated on 4 August, killing at least 171 people, injuring 6,000 and leaving hundreds of thousands homeless.

For many Lebanese people, the explosion was the culmination of years of neglect and mismanagement by the country's leaders.

While the ruling class seems to be going through a face lift, some protesters say the changes are indeed merely cosmetic.

"There are still seven or eight oligarchs. They rule Lebanon, they decide what happens. They need to go as well," he said.

"There's no future for us here, they've taken everything. How can they have the audacity to still be here?"

Prime Minister Hassan Diab and his cabinet resigned on Monday in the face of mounting anger over last week's deadly blast. However, Diab will stay on in a caretaker capacity until a new government is formed, which could take months of political wrangling.

On social media, news of his resignation received a lukewarm response.

"It does not end with the government's resignation," said a protest flyer circulating online. "There is still (President Michel) Aoun, (Parliament Speaker Nabih) Berri and the entire system."

In a brief televised speech after four of his ministers resigned, Diab said a level of corruption “bigger than the state” precipitated the events that led to the blast.

Forming a government
"It's an admission of failure," comments Nadim Houry, Executive Director of the Arab Reform Initiative in Paris. "Not necessarily a personal one but a failure of the system," he said.

"What's regrettable is that Hassan Diab didn't tell us anything we didn't already know. The Lebanese people wanted him to name names, those of the officials responsible for the explosion and who recklessly shunned their responsibilities," Houry told RFI.

Diab formed his government in January with the backing of the powerful Iranian-backed Hezbollah group and its allies, more than two months after Saad Hariri, who had enjoyed the backing of the West and Gulf states, quit as premier amid anti-government protests against corruption and mismanagement.

Forming a government amid factional rifts has been daunting in the past. Now, with the fallout from the explosion and the crushing financial crisis, it could be difficult to find someone willing to be prime minister, even as the hunt begins.

Getting back up
However, pressure from the streets--and from French President Emmanuel Macron, who visited Beirut last week after the blast--could push the political factions to put aside their differences and form a unity government.

This option though is unlikely to satisfy demonstrators reckons Houry. "They believe Lebanon's current oligarchs would just rotate the seats and divide the running of the country amongst themselves."

The researcher proposes instead the creation of a government of national rescue. "In this option, the ruling class would leave the running of the country to an independent government chosen by the Lebanese people for up to two years."

The urgency of the humanitarian situation has put pressure on Lebanon's rulers to put political horse-trading aside for now.

"An independent government would be able to respond to the humanitarian crisis and organize elections two years from now," said Houry, adding this would afford Lebanon time to get back on its feet.

This is what Akufo-Addo and US Vice President Kamala Harris ...
36 minutes ago