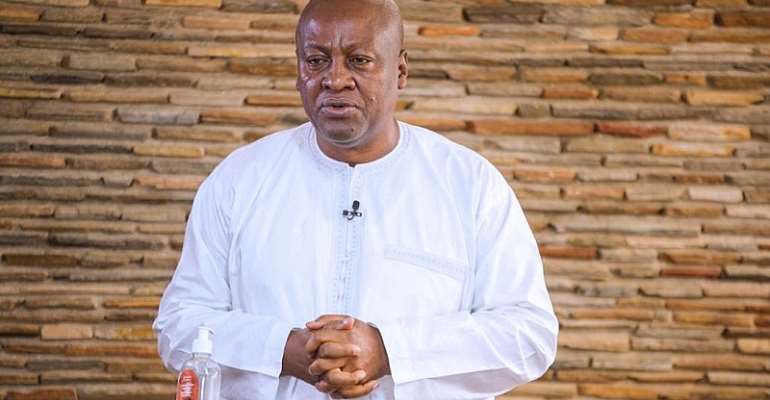 He said the Akufo-Addo government has denied the people of Ghana "the needed peace and freedom as guaranteed them by Ghana’s constitution”.

He indicated that, the constitution guarantees Ghanaians a democratic right to go about their everyday business in peace without fear or intimidation as well as the right to free speech without fear of harassment or death.

These democratic rights the former president noted have been taken away by the current administration making Ghanaians live in fear in their own country.

Mr. Mahama also expressed worry over the manner which radio stations are being closed down as well as attacks on journalists “just because they do not toe the line of government”.

“Our constitution guarantees us certain democratic rights, that is the right to go about our business in peace without fear or intimidation, it also allows us to exercise our democratic rights of free speech without fear of harassment or death, unfortunately some of these things are becoming in short supply under this administration,” Mr Mahama said.

“Ndan Yaa Naa, radio stations and other media outlets that are seen not to toe the line of government have been shut down for several years now, all pleas and requests to have these radio stations opened have been refused. Journalists live in fear of their lives because they fear they will be harassed, intimidated and even in extreme situations they could be killed,” he added.

Such “intolerant acts by the government,” Mahama said is what led to the violence witnessed at various registration centers in the just ended voters registration exercise by the electoral commission.

“It is therefore not surprising that, for a very simple exercise like a registration exercise for people to write their names so that they can vote in an upcoming election, we’ve seen the series of violence that has taken place across the length and breadth of this country. It’s most unfortunate, if you observe most of the incidence that have happened you won’t believe that this is the Ghana that we all know and the Ghana that we are all citizens of”.

He noted that, authority and leadership is granted by God and the will of the people and no amount of violence perpetrated by anyone can give them the power. He pledged to abide by peace and called on his followers to remain peaceful and not do anything to disturb the peace of the country.

He has, however, implored Ghanaians to resist anyone who attempts to intimidate and or use violence to prevent them from voting on Election Day.

Mr. Mahama was speaking at the Gbewaa palace in Yendi when he visited the king of Dagbon after acquiring his voters card at Bole to introduce himself as the leader and flag bearer of the NDC.