Dozens Of Ivorians Arrested For Participating In Voters’ Registration Exercise 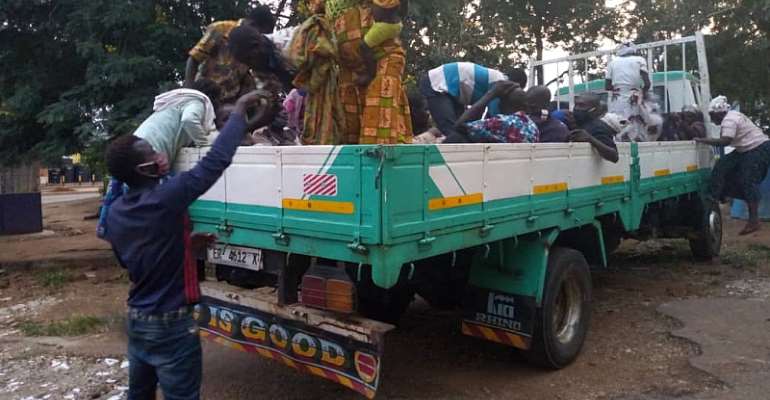 The Bono Regional Police Command is investigating the circumstances leading to the registration of about 63 persons suspected to be Ivorians who allegedly entered Ghana illegally and participated in the just-ended mass voters’ registration exercise conducted by the Electoral Commission (EC).

They were arrested by security personnel led by operatives of the Ghana Immigration Service (GIS) at Douboo, one of the unapproved entry points on the Ghana – Cote D’Ivoire border after they had successfully been registered and issued with their Voters’ ID cards in the Banda constituency in the Bono region.

Luck eluded them when the Ivorian registered KIA Rhino truck they were travelling on back to Cote D’Ivoire broke down at the border post, which is in the Jaman North constituency.

The arrest of these suspected Ivorians give credence to the government’s decision ahead of the registration exercise to beef-up security at the country’s borders.

At the time of filing this report, the suspected Ivorians had been brought to Sunyani, the Bono regional capital by the GIS and handed-over to the Police for further action.

The Second-in-Command of the GIS in Sunyani, Chief Superintendent Henry Akar told the media that some of the suspected Ivorians managed to escape arrest while a few others have been hospitalized due to the trauma they claimed to have suffered at the hands of the Immigration Officers during their arrest.

Beside the new Voters’ ID cards, he said most of them were also in possession of the recently issued Ghana card; adding that both ID cards belonging to the suspects have been seized pending further investigations.

When our reporter interacted with the suspects, it came to light that most of them cannot speak any of the Ghanaian languages and could only communicate in French while a few could speak the twi language.

When questioned, the driver of the Kia vehicle, Kwame Krah, said one Yaw at Tempi in the Ivory Coast hired him to convey the people from Tempi to Kabrono in the Banda District for the registration exercise.

In a related development, the Bono Regional NPP Chairman, Kwame Baffoe Abronye is calling for the immediate arrest of Johnson Asiedu-Nketia, the General Secretary of the opposition NDC for being behind the bussing of the accosted Ivorians into the country.

Chairman Abronye believes that the alleged Ivorians arrested were part of some 2,000 Ivorians who attempted to register earlier at Banda but were prevented by the military in a video that went viral on social media about a week ago.

In a Statement, Chairman Abronye accused Mr. Asiedu-Nketia for personally hiring the Kia Rhino truck, paid for it and brought the Ivorians into the country, housed them at Seikwa and helped them to register and acquire the EC cards.

The Regional NPP Chairman further alleged that three of the Ivorians are relatives of Mr. Asiedu-Nketia, popularly called General Mosquito but are resident in Cote D’Ivoire.

“They are Ivorians and not residents of Ghana. They were led into the country by Asiedu-Nketia and this vindicates the military for preventing 2000 persons loaded in the Kia Rhino truck who attempted registering in constituency. I therefore called on the Ghana Police Service to immediately arrest, investigate and prosecute Asiedu-Nketia for aiding and abetting illegitimate persons to Ghana to acquire Ghanaian ID cards illegally”, the statement partly read.