Man Stabbed To Death Over Woman At Kasoa Pub 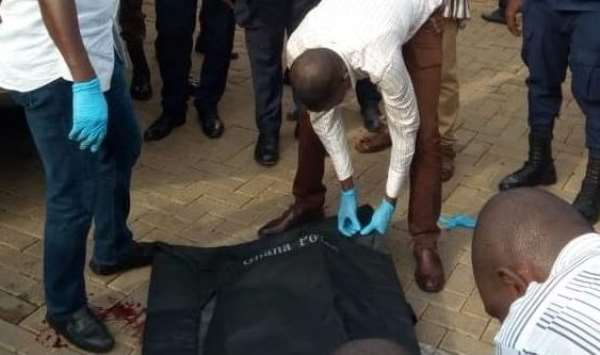 One person has been killed instantly while another is battling for his life after a group of Nigerians clashed at a local pub in Kasoa.

According to Citi News sources, the incident happened last Friday.

The two groups were reportedly fighting over a woman leading to a man identified as Obinna Chucks, a Nigerian national, being stabbed by another group in front of the Gomoa Budumburam Police Station and is receiving treatment at the Cape Teaching Hospital.

The identity of the individual who was also stabbed to death in the Blue Rose estate close to Gomoa Budumburam is not yet known.

Speaking to Citi News chairman of the Nigeria Community in Gomoa Budumburam, Emmanuel Azebuike, indicated that efforts to collaborate with the Ghana Police Service to arrest these criminals have so far been unsuccessful.

“What I heard was that it was a lady that brought the issues where she was misbehaving towards one of the members.”

Emmanuel Azebuike indicated that those involved must be arrested and dealt with according to the laws of the land adding that the authorities are not happy about the incident that has happened.

“It is something very painful but what I know is that this incident is not related to the Nigerian who was shot by the Gomoa Budumburam Police. But the police have arrested one suspects and I also heard that one of the group has gone to put the house of one of the suspects on fire but the army and the Police have managed to put the fire down.

He added that some of Nigerians are tarnishing the image of decent Nigerians in Ghana adding that the law must take its course.

“We are here under the confinement of the laws of Ghana and I have always been advising my brothers to always be law-abiding but most of these boys who are causing problems have nothing to show and we who have our wives and businesses here are rather behaving ourselves. I am telling the government I will help them to fish out these bads boys, Nigerian are good people but some of them have come here to cause problems for is,” Emmanuel Azebuike said.

“We need peace and we cannot be running away because of these few criminals who don’t know what they are here for” he added.

“My government is not happy to be honest with you,” Emmanuel Azebuike said.