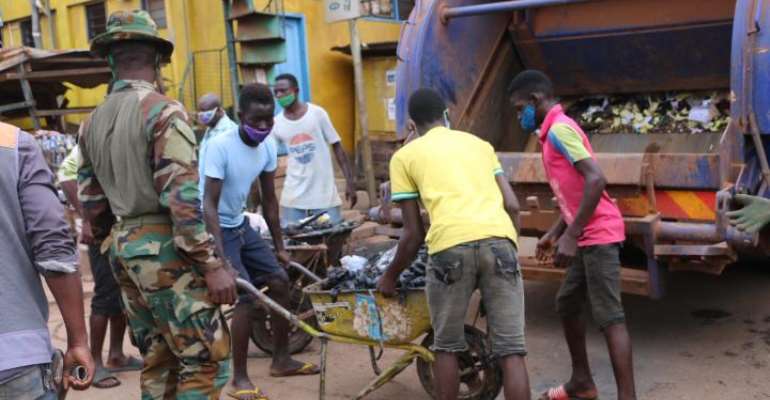 When it comes to cleanliness amongst Regions in the country, Brong Ahafo as it used to be called, but presently divided into Ahafo and Bono Regions stands tall.

The Sunyani Municipal Chief Executive Madam Justina Owusu-Banahene welcomed natives of the region who came to assist in the cleanup exercise.

She reiterated that Sunyani has made the country proud with regards to cleanliness.

She called on everyone present to join in the exercise wholeheartedly to keep the Region clean at all times.

She mentioned that although it was a working day and people were not present in their numbers as they should be, it is still important to carry out the exercise.

She also spoke about the fact that when we keep our surroundings clean and maintain hygienic environments there would be no room for the Corona Virus to reside.

She commended the Ministry of Local Government, Zoomlion and all stakeholders who came to assist in the exercise.

Passionately speaking, the Municipal Chief Executive Madam Justina Owusu-Banahene was of the view that values such as being clean are home learnt values and must be inculcated in us at home.

Moreover, lately we have learnt from school as well the essence of being clean per science.

Therefore she urges everyone to combine the values learnt at home to the scientific ones learnt at school to bolster our cleanliness in society to help combat diseases especially the current Covid 19.

She advised that " there is the need for us to do this every fortnight rather than every three months".

According to Madam Justina, all the central business centers across Sunyani, from the main station to the post office, then to the police station were cleaned.

She mentioned that there are three main markets in the area.

The main market, the Wednesday market and interestingly, the Corona market.

The Corona market she explained was an interim market that was created at the Sunyani Coronation Park.

The name she said was derived from the name Coronation and the fact that the market was created because of the current Corona pandemic.

She mentioned that their efforts to combat this virus is by strictly adhering to the safety protocols that have been given.

Moreover, Sunyani as a Municipal and Nana Hene, thus the Chief of the area decided not to allow children between the ages of 2-15 years to go out during these times.

Culprits who are found are taken to their homes and parents are cautioned.

Some other people were detained at counter backs for some time and freed to serve as deterrent to others who want to turn deaf ears to that precaution against the spread of the virus.

This was enforced by the Corona enforcement team.

She mentioned that these men in uniform's presence have gone a long way to reduce the crime rate in the Municipality.

Nana Bosoma Asore Nkrewe II was highly praised for assisting the Municipality with his efforts and cash of 10,000gh inorder to motivate the workmen on the field.

I lied that you contracted covid-19, you didn’t also chop co...
35 minutes ago