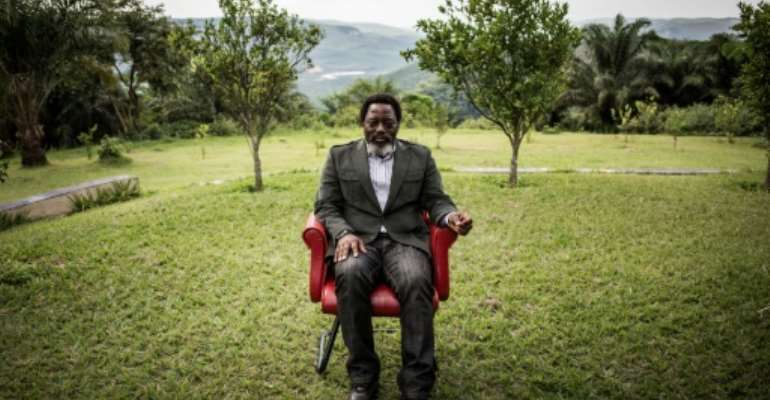 Joseph Kabila has retired to his farm at Kingakati, 80 kilometres (50 miles) from the capital. By John WESSELS (AFP/File)

Officially, he stepped down in January 2019, retiring after 18 years at the helm of the biggest country in sub-Saharan Africa.

But nearly 18 months on, former president Joseph Kabila remains a powerful figure, wielding influence in the murky politics of the Democratic Republic of Congo through a network of followers and a forced coalition with his successor.

"Kabila, come back quickly so we can restore order," his supporters chanted on Thursday as they marched in Kinshasa, where the coalition with backers of President Felix Tshisekedi is in trouble and heads are rolling.

Prime Minister Sylvestre Ilunga has publicly denounced a decision by Tshisekedi to replace two pillars of the former Kabila regime: the army's inspector general and the president of the Constitutional Court.

Kabila handed the presidency to Tshisekedi after elections in December 2018, in the first peaceful transfer of power since independence from Belgium nearly 60 years earlier.

Still only 49 despite his years at the top, Kabila lives on a farm at Kingakati, 80 kilometres (50 miles) from the capital, surrounded by wildlife ranging from lions to antelopes.

In a zoo open to the public, Kabila takes selfies with visitors he sometimes bumps into on Sundays.

The man who once ruled the sprawling DRC during a brutal regional war now goes out with just "two or three bodyguards", according to an aide.

Low-key by nature, Kabila has made no political utterances and has avoided public appearances, even when meeting with Tshisekedi to try to ease the tensions in their uneasy cohabitation.

No information was released about their last meeting at the beginning of July.

But he remains the driving force in his Common Front for Congo (FCC) political group -- a veritable war machine that he set up before leaving office.

In the same elections that brought Tshisekedi to power, the FCC won a commanding majority in parliament, forcing Tshisekedi's supporters into the role of junior partners in what has become a deeply troubled coalition.

Kabila placed the FCC leadership in the hands of his former chief of staff, Nehemie Mwilanya, who hails as he does from the Swahili-speaking east of the country.

Mwilanya acknowledges that "the chief" receives FCC officials on his ranch. "There are courtesy visits and there are visits to seek advice," he said.

"He manages his political family on a day-to-day basis," a former presidential adviser told AFP.

The former head of state has never ruled out a return to the political stage.

"In life as in politics, I exclude nothing," he told the foreign press in December 2018, just before his retirement.

Kabila left office two years after his second and last constitutional term expired. He was under pressure from foreign partners of the DR Congo, including the United States and the European Union, as well as demonstrators.

Protests were called earlier this month over the choice of a new election chief. By Arsene Mpiana (AFP/File)

Kabila's many foes, who have faced brutal repression, feared he would seize a third mandate by force, but elections took place after three postponements.

Earlier this month, three street protests were called by a spectrum of political and social forces including Tshisekedi's Union for Democracy and Social Progress (UDPS).

One of their grievances was the choice of a new election chief who has been accused of rigging elections in favour of Kabila.

President Felix Tshisekedi must govern in coalition with the former president's supporters who have a commanding majority in parliament. By Sumy Sadurni (AFP/File)

Kabila supporters see their role as containing Tshisekedi's influence in the name of "a balance of power".

Some argue that nothing stops him coming back. The next elections are due in 2023.

"The constitution bans three consecutive terms, but it says nothing about a possible return after a gap of five years," a former adviser said.

Kabila's right-hand man Mwilanya, a lawyer, is firmer still: "The constitutional rules are clear. They impose no restrictions on him per se."