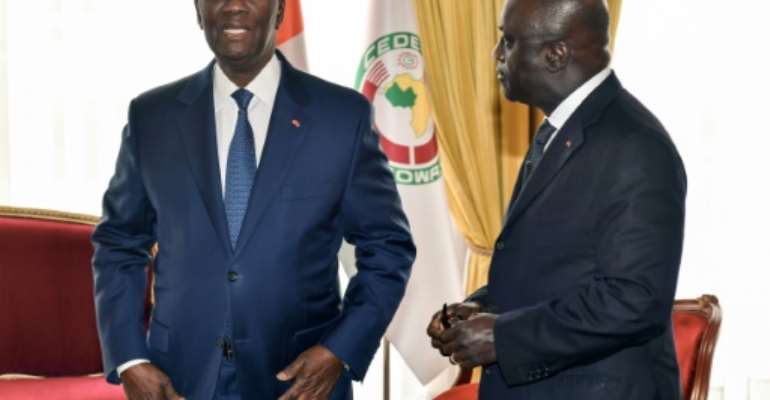 Ivorian President Alassane Ouattara, left, with the then foreign minister Marcel Amon-Tanoh, pictured in October 2018. Amon-Tanoh has declared his bid to succeed Ouattara as head of state. By ISSOUF SANOGO (AFP)

"I have decided to be a candidate in the next presidential elections," the 68-year-old said in a brief announcement to journalists at a luxury hotel in Abidjan.

Pitching himself as a stabilising figure in a country still scarred by a brief civil conflict nearly a decade ago, Amon-Tanoh said he wanted to be the "bridge between the state and the people, between the respect for our traditions and our desire for modernity."

The race to become Ivory Coast's next president has become more uncertain after Prime Minister Amadou Gon Coulibaly died of a heart attack on July 8 at the age of 61.

He had been styled as the anointed successor to 78-year-old President Alassane Ouattara, who in March signalled he would not seek a third term in office.

But his death has now stirred speculation that Ouattara may opt for a third spell if his RHDP party cannot settle on a different successor.

Amon-Tanoh, who is reputedly close to Ouattara, notably did not say whether he had the backing of a party for his election bid.

He stepped down in March after nearly three and a half years as foreign minister, a move that heralded an expected tilt for the presidency. He served previously in ministerial posts for transport, tourism and construction and as Ouattara's chief of staff.

One of the world's major coffee and cocoa producers, Ivory Coast is still marked by the trauma of a brief civil war that erupted in 2011.

Ouattara, at the head of a rebel force based in the Muslim-majority north of the country, ousted the then-president, Laurent Gbagbo, who refused to leave office after losing long-delayed elections.

The months-long standoff claimed some 3,000 lives and dug a division across the country.

Among the opposition, former president Henri Konan Bedie, 86, will be the candidate for the Democratic Party of the Ivory Coast (PDCI), while the Ivorian Popular Front (FPI), which is split in the absence of its historic chief Gbagbo, has yet to name a champion.

Former rebel chief and ex-premier Guillaume Soro, 47, has said he will contest the vote, but lives in self-imposed exile in France.

He has been sentenced in absentia to a 20-year jail term in Ivory Coast on charges of attempted insurrection.