The People Of Tangasia Appeal For Help After Contractor Destroys Farms 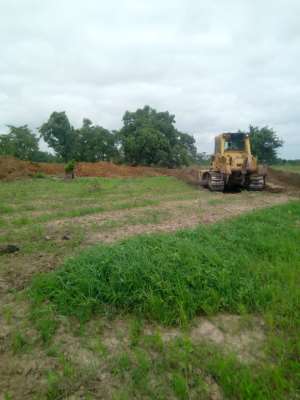 On 8th July 2020, some women from Tangasia visited the premises of Tumpaani 88.5 FM to lay a complaint to the station about their crops being destroyed by the construction of a dam under the one village one dam project.

The construction has just started at where there are so many farms around with crops.

According to the aggrieved women, they got to their farms only to realize their farm crops have been destroyed without any notice or engagement.

They were accordingly not privy to any information that their farms were occupying an earmarked site for the construction of a dam. These women have been farming on that piece of land for some years.

When Tumaapni FM got to the site to ascertain the facts of the matter, the contractor, Assemblyman, the NPP parliamentary candidate, Hon. Elvis Botah were on the site where the consultant took everybody through the demarcation of the site for the project. Indeed, many farms were badly affected.

Crops such as rice and beans were affected.

Hon. Elvis Botah who hails from the area took it upon himself to compile names of the affected farmers and promised to personally compensate all of them. He also urged them to calm down because he will do his best to intervene and resolve the issues amicably.

Tumpaani FM will continue to monitor any development relative to this issue.