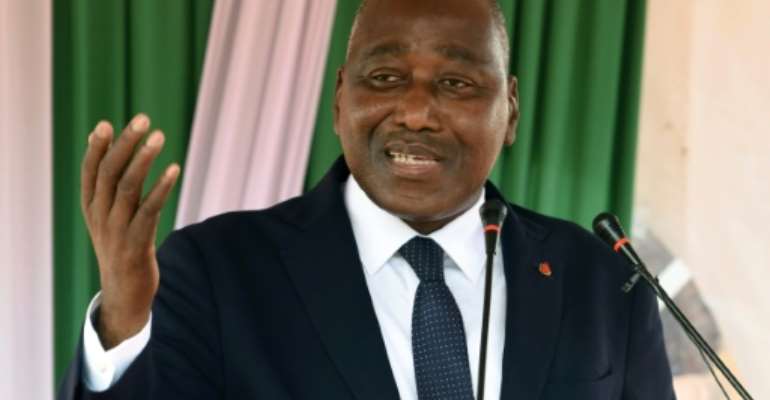 The West African state of Ivory Coast was plunged into disarray on Thursday after the sudden death of its prime minister, the front-runner in looming elections for the presidency.

Commentators said the demise of Prime Minister Amadou Gon Coulibaly, who died after receiving heart treatment abroad, was a devastating blow to a country still scarred by a low-level civil war.

Coulibaly was appointed prime minister in 2017, tasked with pursuing economic recovery in a country battered by slumping prices for its key exports of cocoa and coffee.

The French-educated engineer gained a reputation for hard work and a fiery temper.

The 61-year-old was named in March as the candidate for President Alassane Ouattara's RHDP party in October's presidentials, ending months of speculation that the 78-year-old incumbent would run again.

Ouattara, to much surprise, signalled he would step down after two terms in office rather than campaign again.

In 2011, Ouattara ousted the then-president, Laurent Gbagbo, who refused to leave office after losing elections. The months-long standoff claimed some 3,000 lives and left divisions that linger today.

Coulibaly returned to Ivory Coast last week after a two-month stay in France, where he received a coronary stent to alleviate recurring heart problems. He died on Wednesday.

"He had just got back from being ill, I thought he was OK," said Johanne Ibo Kouakou, a trader, among many in Abidjan who voiced their shock.

"Amadou was like our father," said Mahamadi Sawadogo, a security guard.

"This has really shocked us. He was a great man. He worked really hard -- people were counting on him to complete what Alassane Ouattara began," said Ibrahim Dembele, a cabinet maker.

Shock: The headlines of Ivorian newspapers on Thursday. By Issouf SANOGO (AFP)

The close relationship between Ouattara and Coulibaly was spelt out in the president's tribute, which referred to him as "my younger brother, my son... a man of great loyalty, dedication and love for his homeland."

Praise also came from Guillaume Soro, a former rebel chief who lives in self-exile in France to avoid potential jail time back home.

He said he had "shared a long fellowship" with Coulibaly, who like him hailed from the north of the country, and their wives and children had often met up in France.

"These ties have never worn away, despite the current political climate," Soro said.

Like Ouattara, he was at ease in international financial circles and was also the country's budget minister, giving priority to solid macro-economic management over social programmes, according to critics.

"AGC was the key" of the president's strategy, said political analyst Jean Alobro, referring to the late premier by his initials.

Coulibaly's personal contacts with chiefs in the north of the country provided RHDP with crucial support, said Alobro.

"Right now, all the possible options are bad ones," he said.

One choice, he said, would be for Ouattara to run again -- something that would stoke accusations of abuse of democracy.

President Alassane Ouattara is viewed by many as a stablising figure, but any bid for a third term may trigger accusations of authoritarianism. By SIA KAMBOU (AFP)

Ouattara and his supporters contend that a change to the constitution in 2015 gives him the right to seek a third term.

This argument may well be backed up judicially as obeying the letter of the law, although critics would contest it would abuse the law's spirit.

Another option is Defence Minister Hamed Bakayoko, who stood in for Coulibaly while he was abroad for medical treatment but is perceived as his fierce rival.

"He is not liked by part of the public because of his role in the revolt -- some see him as a 'murderer'," said Alobro.

One possibility would be to postpone the vote on the grounds of the coronavirus pandemic, he said.

In contrast, Modeste Goran, a professor at the Felix Houphouet-Boigny University in Abidjan, predicted the ruling RHDP should be able to find a suitable alternative candidate in the months ahead.

The party also has "weight, a reputation and activism, which can help a new leader to win," he said.

You can’t dictate to Akufo-Addo; stop the disrespect – Sefwi...
45 minutes ago